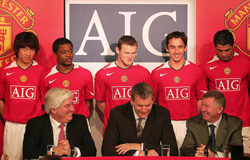 The agreement with insurer American International Group (AIG) is worth £56.5m over four years, the club confirmed.

The deal should help United bolster their squad to help them challenge for domestic and European honours.

Earlier this year, a survey said that Real Madrid had leapfrogged Manchester United to become the world’s richest football club in terms of income.

The club hopes that the shirt deal will go a long way towards helping to finance a recovery.

“The financial foundation will benefit the club as a whole and we can look forward to years of progress through that,” he said.

“But for me it’s always going to be about how we can improve the team and nothing changes in that respect.

“I go to (chief executive) David Gill and say ‘this is a player I’d like’, then we assess how much it’s going to cost and take it from there.”

The new shirt deal has not been without controversy. Earlier this week United were accused of “double dealing” by online casino firm Mansion.

United have been looking for a new sponsor since Vodafone announced in November that it would start sponsoring the Uefa Champions League, both as an official partner and the official mobile network of the competition.