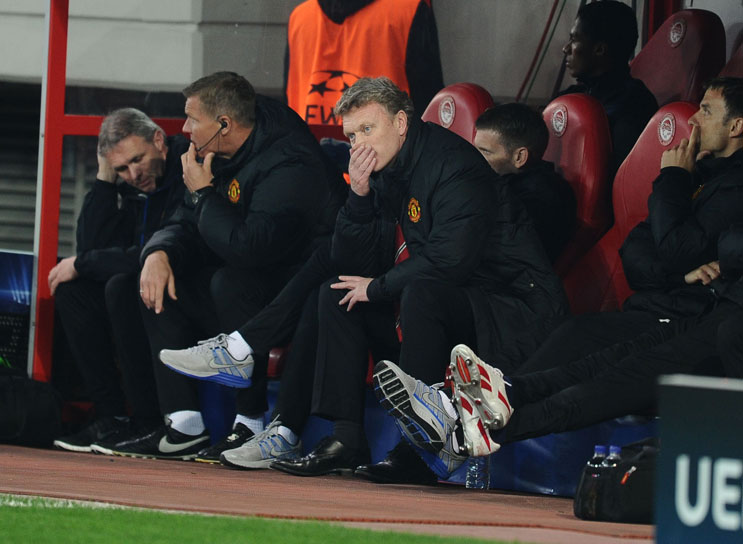 The British tabloids enjoyed a field day following Manchester United’s dismal Champions League defeat to Olympiakos. Mousacka Moyes was the headline in today’s Sun, whereas the Daily Star was relatively restrained in describing the 2-0 defeat as a Greek tragedy.

While the press speculate on Moyes immediate future, and it’s hard to imagine that the club will accept many more defeats before deciding to cut their losses, we have the opportunity to provide some historical context for last night’s humiliation.

So, just how bad was last night’s performance and was it, as some have suggested, United’s worst display in the Champions League?

Here are five horror shows from the Champions League era.

A fresh nadir for David Moyes, and there have been plenty of them this season, as United capitulate feebly to Olympiakos.

Having been given the easiest possible draw, United were expected to sail through to the quarter-finals. There had even been talk of them emulating Liverpool in 2005 by winning the trophy even if they fail to finish in the Premier League top 4. Now, such talk looks not so much fanciful as preposterous.

Manchester United made their long-awaited return to Europe’s elite competition and hopes were high of them competing with the likes of Milan and Barcelona. But first, the relatively straightforward task of overcoming unfancied Turkish champions Galatasaray, a side with no pedigree in Europe whatsoever.

The second leg, played in a feverishly intimidating atmosphere in Istanbul ended goalless (read more about that infamous trip to ‘Hell’, here), but the damage was done at Old Trafford when United led 2-0 only to be held 3-3 by the visitors.

Looking at the players representing United, it seems like a different era altogether…Cantona, Hughes, Robson, Giggs…Giggs?!

No shame in losing to the Spanish champions, one could argue, but this was a thorough dismantling of an experienced United side by a team on the wane. True, United were hampered by the restrictions on the number of foreign players they could field, but the eleven they put out out on that night in Barcelona was packed with international experience.

Much was made of Johan Cruyff’s dream team featuring the likes of Romaria and Hristo Stoichkov, but it is easy to forget that this team of so-called world beaters scraped through to the knockout phase as runners-up after losing to both Galatasaray and Gothenburg in the group stages, and were duly knocked out by a distinctly ordinary Paris Saint-Germain team.

United went to Benfica knowing they would reach the last 16 with a victory. All was going to plan when Paul Scholes scrambled an opening goal, but Benfica hit back to win 2-1 after goals from Geovanni and Beto.

The defeat meant Sir Alex Ferguson’s side did not even qualify for the UEFA Cup. It was the first time in 11 years that United had not emerged from the group stages.

According to the BBC match report, “Ferguson cut a disconsolate figure sitting back in his dug-out at the final whistle and is now poised to face even more hard questions about his Old Trafford future.”

He faced those questions for another 8 years.

They only needed a draw in Switzerland, but Manchester United failed to advance past the Champions League group stage for only the third time in 17 years after this humiliating defeat at Basel.

The reigning Premier League champions went behind to Marco Streller’s strike after poor defending, Alexander Frei nodded a second before Phil Jones’s late header left United a goal short of the draw they needed to go through.