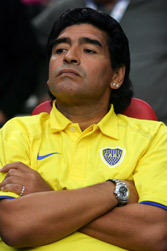 The Argentinian legend has been placed in intensive care while undergoing tests, but his personal doctor, Alfredo Cahe, said Maradona’s condition was not life threatening.

“Diego has been hospitalized. His life isn’t in danger – he is in intensive care as a precaution,” Cahe told Continental Radio. “He had abdominal pain and, given he had these strong abdominal pains, we felt it prudent to bring him here.”

The 47-year-old Maradona was released Wednesday from a clinic after two weeks of treatment for hepatitis. Cahe said the abdominal pain could be a result of the treatment.

Oscar Cicco, director of the hospital in the southwestern suburb of Ezeiza, said Maradona was “lucid” and cooperating wth doctors.

“He is stable and conscious,” Cicco said.

Maradona entered the private Guemes Sanatorium in Buenos Aires on March 28 suffering from what his doctor said was overindulgence of alcohol, food and cigars.

“If I don’t do it, the only one who will be hurt is me,” Maradona said on Wednesday. “I’m going to complete my treatment.”

Maradona nearly died in 2000 and 2004 when his condition was blamed on cocaine addiction.