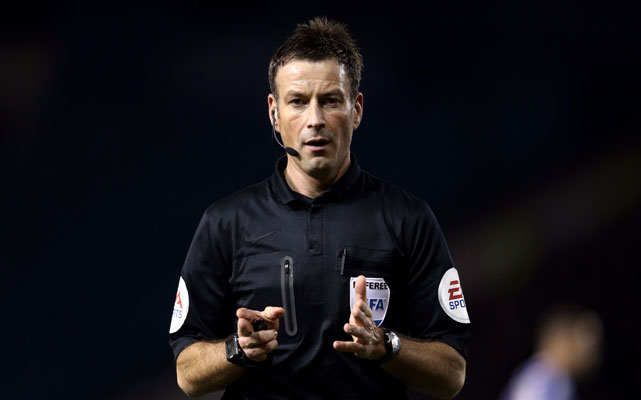 Mark Clattenburg is to quit the Premier League to take up a role with the Saudi Arabian Football Federation.

The 41-year-old, England’s most recognisable referee, has reportedly grown unhappy with the level of public support officials are given by Professional Game Match Officials Limited (PGMOL).

The Consett-born referee’s final match was last Saturday’s Premier League fixture between Arsenal and Hull – a game laced with refereeing controversy when a handball was missed before Alexis Sánchez’s opening goal and Hull were fined £20,000 for failing to control their players,.

It is understood Clattenburg will replace the former Premier League referee Howard Webb, who moved to become the head of refereeing in Saudi Arabia in 2015.

Clattenburg has been a Fifa referee since 2006 and officiated the Olympic men’s football final at London 2012. In 2016 he was in charge of the FA Cup final, the Champions League final and also the final of Euro 2016. In August 2016 Clattenburg had the logos of the UEFA Champions League and the 2016 UEFA Euro tattooed on his arm to mark the final of the two competitions that he officiated that year.

His career has not been without controversy. He served an eight-month suspension in 2008 and 2009 after PGMOL investigated his business dealings and in 2012 Chelsea complained that he had spoken inappropriately towards Mikel John Obi during a game against Manchester United. He was cleared of any wrongdoing.

Last year Clattenburg said he would one day like to be able to help a country like China raise refereeing standards.

“Money has never been a driver as a referee … it’s about the drive of doing something different, maybe helping the recruitment,” he said.

“If it didn’t happen now I will be looking in the future at that, a bit like Howard Webb has done [in Saudi Arabia] where you are helping another country develop refereeing.

The PGMOL issued a statement thanking Clattenburg for his services to refereeing.

“The PGMOL would like to wish Mark Clattenburg well as he prepares for his move to the Saudi Arabian Football Federation,” a statement said. “Since joining the PGMO Select Group in 2004, Mark developed into one of our top officials, refereeing at the highest level and setting standards for others to follow.

“Mark is a talented referee, he has been a great asset to the English game and hopefully an inspiration to those who want to get into refereeing at the grassroots of the game.

“We understand this is an exciting opportunity for Mark as well as further underlining what high esteem English match officials are held throughout the world game.”