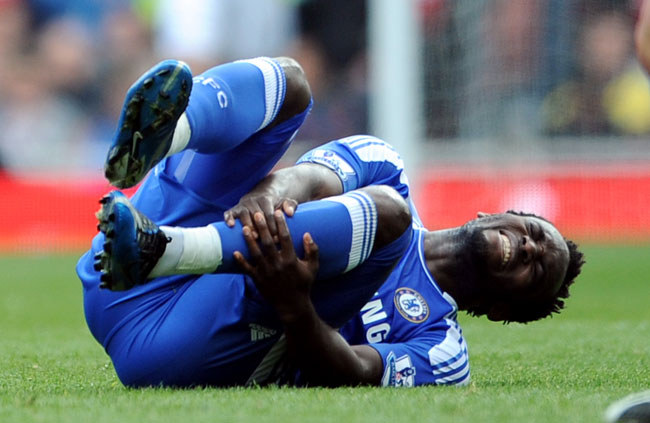 Michael Essien on the ground after suffering a rare injury.

Media reports had claimed that the midfielder had failed an initial medical ahead of his transfer to the Serie A outfit.

However  Milan sporting director Adriano Galliani responded to such reports by insisting the Ghanaian international, who has agreed an 18-month deal, is perfectly fit.

“Essien is fit. All the rumours about his fitness are just urban myths, I don’t even know where they have come from,” Galliani told reporters.

“I directly followed all the medicals and they assured me that there has never been any problem.

“We thought our squad was good enough, then we faced a problem concerning our next Champions League game against Atletico Madrid.

“We won’t be able to field both [Riccardo] Montolivo and [Sulley] Muntari, so we looked for a suitable replacement and we agreed that Essien was the man.”

So, let’s take a look at Essien’s recent injury record to find out whether he is indeed an accident waiting to happen.

Season 2011-12: Ruptured his anterior cruciate ligament and meniscus and missed 6 months of the season.

Essien’s season with Madrid during which he had a relatively light playing schedule, does show that he is capable of playing for a sustained period without injury. However, looking at his historical record, it looks like Milan’s decision to offer him just an 18 month deal was a wise one. Sooner or later, but probably sooner, there will be another breakdown.