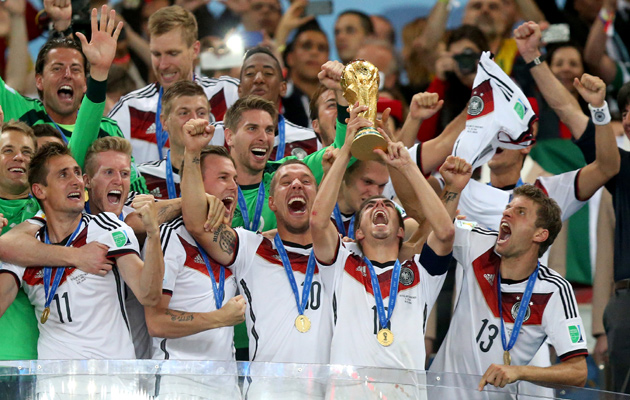 Michel Platini says a German player should win this year’s Ballon d’Or award rather than either Cristiano Ronaldo or Lionel Messi, who are the bookmakers favourites to win this year’s trophy.

Ronaldo, last year’s winner, is the favourite to land the prize again after his record-breaking goalscoring exploits during Real Madrid’s Champions League triumph last season. Messi, a four-time winner of the award, is also expected to figure prominently after inspiring Argentina to the World Cup final.

However, Platini believes that a member of Germany’s World Cup-winning squad deserves the accolade.

“I don’t vote for the Ballon d’Or but, in principle, [in a World Cup year] it’s a player who has produced big performances in the tournament who wins it,” the UEFA president told beIn Sports. “So, it should be a German this year.

“It was like that until 2010, when Messi won in spite of having had an average World Cup, so nothing is certain for this year.

“However, what is certain is that Cristiano Ronaldo is one of the best players in the world long with Lionel Messi. There’s no doubt about that.”

Platini, who won the equivalent award (then named the European Footballer of the Year) three times in the 1980s, admitted that football had changed a lot since his playing days.

“Football has taken another dimension in the last 20 years,” Platini added.

“The superstar status players enjoy is proportional to that. Players benefit in every way.

“In return, though, they have more orders to follow than in the past. In my time, we were freer.”