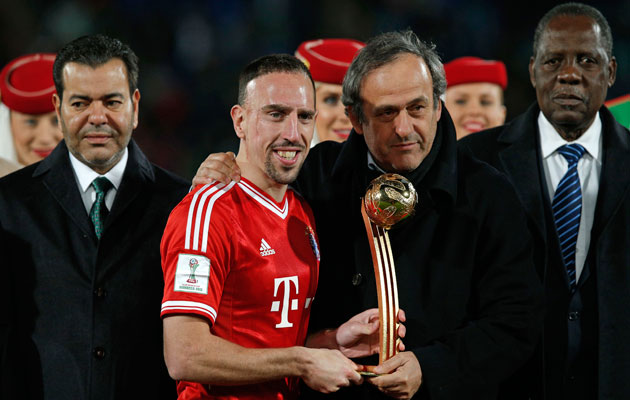 UEFA president Michel Platini has threatened France playmaker Franck Ribery with a suspension, unless he makes hi available for the international team.

Bayern Munich winger Ribery announced his retirement from France duty after the World Cup in Brazil, which he missed due to a back injury.

But Platini now claims the Bayern Munich player will have no choice but to continue playing for his country if selected.

“If there is disagreement between Lahm and [Joachim] Low, the Germany coach will no longer call on him, that’s one thing. But basically it is not Lahm’s decision, it’s Low’s.

“[With Ribery] it’s a very different situation. Franck Ribery cannot simply decide whether he plays for France or not. If coach Didier Deschamps invites him, he must come to the national team.

‘This is defined in the Fifa statutes. If he does not come, he is suspended for three games with Bayern Munich. I don’t understand him anyway. He is French, the European Championship in 2016 will take place in France!”

A FIFA rule exists whereby players must accept national team call-ups to prevent them – or rather their clubs – from picking and choosing which internationals they play.

But national teams usually respect a player’s decision if he decides to retire from international football.

That wasn’t the case, however, back in 2006 when then France coach Raymond Domenech demanded Claude Makelele return to the national team despite him having announced his international retirement after the World Cup.

That led to Makelele’s then Chelsea manager Jose Mourinho accusing Domenech of treating his player “like a slave”.