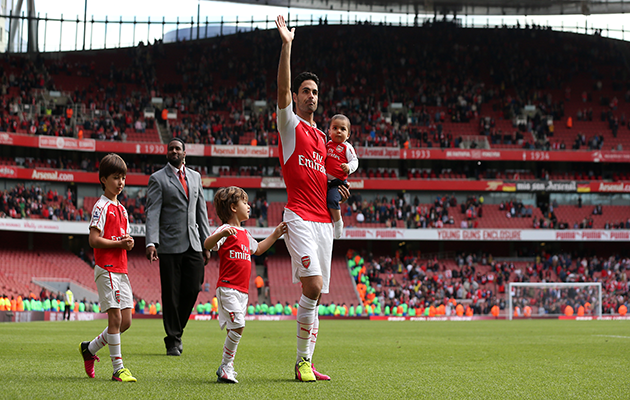 Mikel Arteta has confirmed his playing career is over, a day after playing his final match for Arsenal.

Arteta, 34, appeared as a substitute in the 4-0 win over Aston Villa that secured a second-place finish for the club above local rivals Tottenham Hotspur.

The Spanish midfielder’s contract at the Emirates Stadium expires this summer, and he will leave his role as Arsenal club captain to pursue a coaching career.

“It is very hard to stop but I wanted to leave it,” he said in the Guardian. “I wanted to decide, and I thought for the last few months that I wasn’t good enough to represent this club on the pitch.

“You have to accept it. It has been a long time for me to be playing football and I didn’t want to cheat them or anyone. It is time. I want to leave it like this and we will see what happens.”

“You have to be honest with yourself. That’s why I haven’t been upset with the manager [Arsène Wenger]. I have been upset with myself. When you can’t get it right and you have been through injuries and difficult moments at this level.

“For me, to play at this club, you have to be the best in your position. When you lose that, I think you should be away from this place. I have probably been here too long. In the last few months, I probably didn’t deserve to be here but at least I got the chance [against Villa] to stay in touch with them and it has been amazing.

“For me, the standards you need to play for this club – it cannot be eight out of 10. It has to be 10 out of 10. When you cannot deliver that, it is not good enough. Sometimes, people get away with it. Inside myself, my gut wasn’t clean and, when you are like this, I prefer to make the decision myself.”

The Guardian also reports that Arteta, who signed from Everton for £10 million in 2011, has received offers for coaching roles.

“It is very unusual to have opportunities at this level,” he added. “That has made me think it was probably time [to retire] and the way I have been watching football in the last few months – or, probably, over a year – it was not as a player, it was more as a coach. Then, you have to think about it.

“I don’t want to say clubs but I have three very different options and I am very proud, because it is not common. I have been left the door very open [at Arsenal] and I may have to make a decision.