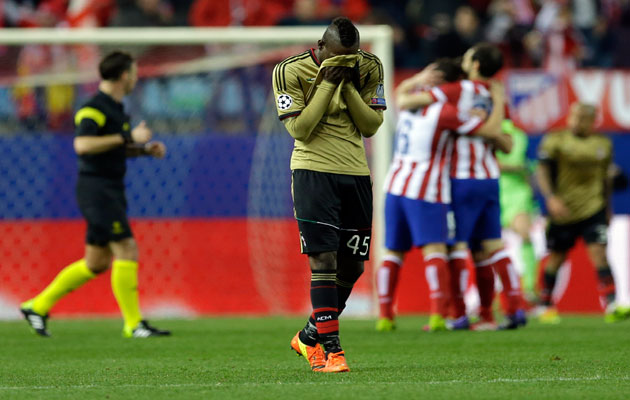 Milan have come in for criticism following their dismal 4-1 defeat to Atletico Madrid, a result which dumped the seven-times winners out of this season’s Champions League.

Gazzetta’s lead headline read: “Zero Milan, beaten and out of everything.”

Tuttosport‘s headline read: “Atletico too much for this Milan.

The club’s striker Mario Balotelli was singled out for criticism by some sections of the Italian media following his performances in the tie.

The Corriere dello Sport said: “Terrible performance by the Rossoneri.

Michael Essien was another whose performance was question.

Gazzeta describes Essien’s performance as sleepy and attributed two of the goals conceded over the two legs to the Ghanaian midfielder.

“Essien played well in the first leg but this was different. It was a disaster. He was soft in the tackle, dreamy and unresponsive.”

Tuttomercatoweb described Essiens’s performance as a “negative” and “elderly”.

That is hardly surprising given that he is probably 47-years-old.

Legendary Italy coach Arrigo Sacchi described the exit as a “sad moment and a disaster for Italian football.”

“They are a bunch of individuals and lost the plot during the game.”

Another person unimpressed by Milan’s display, was former striker George Weah, who described the performance as a scandal.