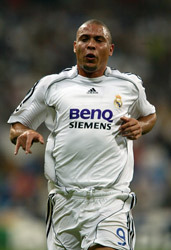 Milan have confirmed they have made an offer for Real Madrid striker Ronaldo, but said any deal would not be completed until the results of a medical are known.

“We are making an offer for Ronaldo, we are negotiating. Let’s see what happens,” Milan vice-president Adriano Galliani told the club’s web site (www.acmilan.com).

“Everything, then, will depend on the results of the medical. There are still a lot of things to do.”

Galliani would not disclose the timing of the medical, but Italian media reported he was expected to fly in to Milan later on Thursday.

There was also confirmation from within the club that negotiations with Real had been completed.

“With Real all problems have been overcome,” revealed Milan lawyer Leandro Cantamessa.

“Monday or Tuesday could be the day for the completion of the contract.

“Everything will depend on the medicals Ronaldo will have with MilanLab and from the evaluations of the Rossoneri’s doctors.”

Spanish media reported Milan had made a six million-euro offer for Ronaldo.

Daily El Mundo said that Ronaldo would sign an 18-month contract with Milan who would be prepared to let him finish his career at the club provided his fitness stood up.