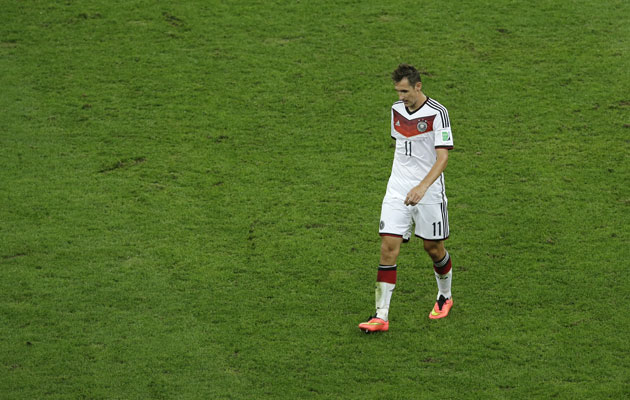 Miroslav Klose, has announced his retirement from international football. The decision comes less than a month after the striker helped his country win the 2014 World Cup in Brazil.

He quits as Germany all-time leading scorer with 71 goals – three more than Gerd Muller, although he appeared in more than twice the number of internationals as the 1974 World Cup winner.  He took his tally of World Cup goals to a record 16 during the 2014 finals, overtaking Ronaldo in the process, to become the World Cup’s all-time leading goalscorer.

“With the win in Brazil, a childhood dream came true, I am proud and happy that I was able to help this great success,” Klose told the German Football Association’s official website. “I had a unique and wonderful time and many memorable moments with the national team.”

Klose – who was born in Poland – made his Germany debut in 2001 and has since played in four World Cups, scoring at all of them. He is also the only player to have appeared in 4 World Cup semi-finals.

The Lazio striker, though, sought to play down his personal achievements.

“The team’s success was and is always the top priority for me,” he added. “I’ve achieved our goal with the national team but I have achieved goals I set personally too. Anyone who knows me knows I am very ambitious. The job of a striker is to score goals and it never occurred to me about records. As a striker I am always dependent on my team-mates and I give them a big thank you.”

Klose retires with Germany having never lost whenever he has scored, and World Cup winning coach, Joachim Low, was effusive in his praise of the striker.

“Miro Klose is an international star. He is one of the greatest strikers there have been,” he said.

“His footballing qualities; his aerial ability, his goal threat, his understanding and his tireless commitment are second to none, and yet I have barely seen a player who is so much about modesty and team spirit. For Miro it was always an honour to play for the national team and he has given everything to Germany. He will be missed as a footballer and a person and I am happy and grateful I was able to work with him.”

As for him eclipsing Gerd Muller, whose’ 68 international goals came in an astonishing 62 games, the modest Klose was quick to play down the comparison.

“I could never mention myself in the same breath as Gerd Muller,” he said when he equalled Muller’s record in 2013.

It seems unlikely that Klose, a classic poacher, will ever be regarded as one of the all-time great strikers. But, with 71 international goals and a World Cup winner’s medal under his belt, it seems equally unlikely that he will ever lose sleep over his place in football’s pantheon of stars.