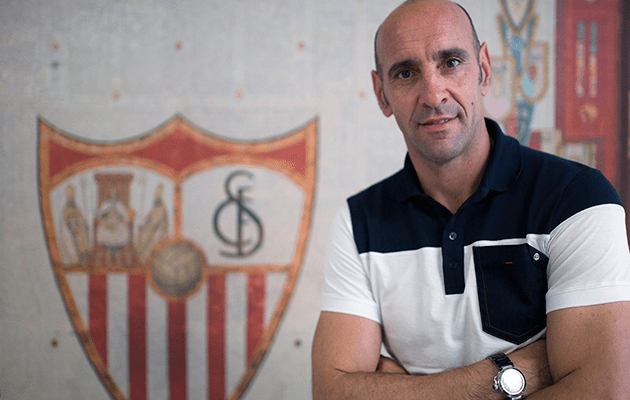 Sevilla have insisted their sporting director Monchi honours his contract with the club, amid speculation that he is a target for both Manchester United and Everton.

Monchi has been with the club since 2000 and has been credited with overseeing an unprecedented period of success which has brought a return of nine trophies, including four UEFA Cup and Europa League successes.

On the back of last month’s Europa League victory over Liverpool, the 46-year-old’s reputation is sky high, with several clubs reported to be prepared to pay his €5 million release clause.

However, following a meeting on Tuesday, the Andalucian club released a statement admitting that Monchi had wanted to leave “for personal reasons” but that they would not allow his contract to be broken and that the matter had now been settled.

“Sevilla FC, after analysing in recent hours the request presented by its sporting director, Ramon Rodriguez Verdejo, Monchi, to settle his contract with the club, has decided to require him to fulfil his contract signed last summer and which connects the coach from San Fernando with the club until 30 June 2020, so Monchi will remain in his current position,” the statement said.

“Monchi, at the meeting he had with the board this Monday at lunchtime, communicated to the directors his desire to leave his position at Sevilla for personal reasons.

“At the core of the club the situation was weighed up during the day and the final decision was made to communicate to Monchi the wish for his contract signed by both parties to be respected, so that the sporting director remains in his position at the club.

“Monchi has accepted the club’s decision and has communicated his commitment to keep working with the same dedication and professionalism that he has always shown to the club. The club wishes to show its satisfaction with this solution and thanks Monchi, being fully confident that he will continue in his role with the same intensity, quality and efficiency that he has always shown.”

That would appear to be that.