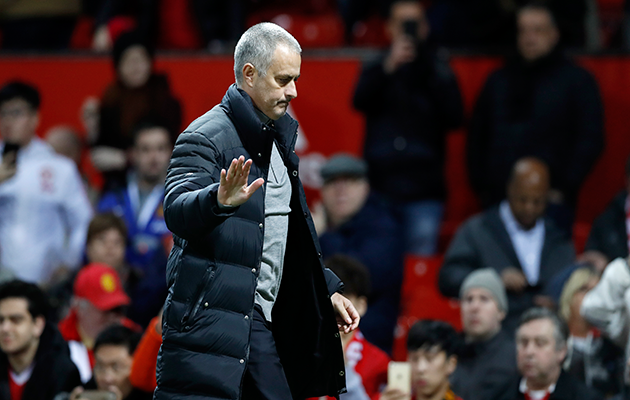 José Mourinho has complained of the double standards of match officials after a match official threatened to send him to the stands during Manchester United’s 0-0 draw with Hull City.

The result was United’s ninth draw of the Premier League season which left them 14 points behind leaders Chelsea and four adrift of an automatic Champions League place. Afterwards, an irate Mourinho claimed Liverpool boss, Jürgen Klopp, and Arsenal’s, Arsène Wenger, enjoy preferential treatment from officials compared with him.

During Liverpool’s 1-1 draw with Chelsea at Anfield on Tuesday Klopp was told his “passion” was appreciated by the fourth official, Neil Swarbrick. Last month Wenger was widely perceived to have been treated leniently when he received a four-match touchline ban for pushing the fourth official Anthony Taylor during a 2-1 win over Burnley.

On Wendesday, Mourinho became increasingly angry at the decisions of the referee, Mike Jones, and his assistants.

“If I speak I am punished. I don’t want to be punished,” he said.

“Yesterday one fourth official told to a manager [Klopp]: ‘I enjoy very much your passion, so do what you want to do.’ Today I was told sit down or I have to send you to the stands, so everything is different for me, so don’t ask me questions that put me in a difficult situation, so to end the story.”

After the game, the Manchester United manager stormed out of a BBC interview after informing his questioner he was not qualified to do his job.

“If you don’t know football, you shouldn’t be with a microphone in your hand,” he said.