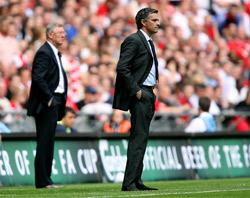 Jose Mourinho has denied he is interested in succeeding Sir Alex Ferguson as manager of Manchester United, distancing himself from previous comments attributed to the Inter boss.

The Serie A leaders travel to Old Trafford on Wednesday to face Ferguson’s side in the last 16 of Champions League with the tie finely poised at 0-0 after the first leg in Italy a fortnight ago.

Reports over the weekend suggested that Mourinho was keen on replacing Ferguson once the 67-year-old steps down.

Mourinho was quoted in the News of the World saying: ”If you want me to rule out ever being Manchester United manager I can’t. Special clubs need special managers so in theory it could work, but nobody knows what the future is in football”.

However, the former Chelsea manager has moved to play down the speculation as he is anxious not to anger Ferguson, a man he respects.

Eladio Parames, Mourinho’s advisor, told The Sun: ”Jose did not give an interview or speak with anyone about Alex Ferguson’s job.

”The contents of the article are ridiculous. First, it shows a lack of respect to Sir Alex, whom Jose is a great admirer of and believes will manage Manchester United for many years to come.

”Jose has a deal with Inter, which he plans to honour. And it shows a lack of respect to Manchester United in a week in which Inter are preparing to face them in an important Champions League match.

”Jose would not say that he will definitely beat Manchester United in Wednesday’s game. Of course he wants to beat United, but that is a different thing.”