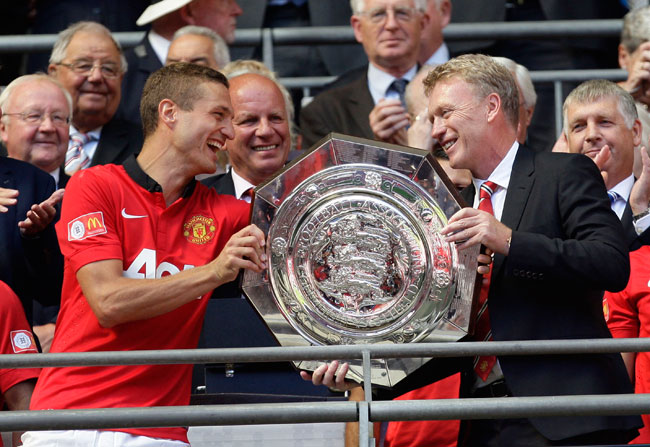 Nemanja Vidic and David Moyes joke about which of them will be the first to leave Manchester United.

David Moyes says he and Nemanja Vidic both decided it was time for the Manchester United captain to leave Old Trafford.

Vidic announced on Thursday that he would be leaving the reigning Premier League champions after eight seasons at the club.

“It was something that we all mutually agreed together,” the United boss said. “I think it was the right decision for club and player.”

There was no rift between the pair, with Moyes giving his blessing to the departure of the long serving defender.

“It’s like rats leaving the sinking ship. You can’t blame the lad.

“To be honest, if I were Nemanja, playing behind that rabble and managed by me, I wouldn’t hang around either. I’d be out of the door quicker than you could say Wilf McGuinness.”

No, not really, but Moyes confirmed that Vidic, who has been heavily linked with a move to Inter, will remain  captain until the end of the season.

“He has been a brilliant servant for Manchester United,” the Scot added. “He is captain and it will remain that way until the end of the season. He has been a great player for us and we will continue using him.”

There was some good news for Moyes though: Marouane Fellaini has suffered a groin injury and will be out for another week.