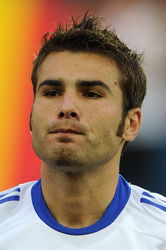 Chelsea are back on top of the Premier League after seeing off Liverpool 2-0. See how this has changed the outright betting here.

A Swiss court has temporarily suspended Adrian Mutu’s fine for testing positive for cocaine and being sacked by Chelsea five years ago.

In July, the Switzerland-based Court of Arbitration for Sport (CAS) upheld a FIFA ruling that the Romania striker had to pay €17.17 million in damages to the English club but Mutu appealed to a Swiss federal court.

The Fiorentina forward’s agent Victor Becali told Gazzetta dello Sport: “The suspension of the fine is a positive decision for Mutu, but we must not celebrate because this is just the first step. This is a provisional suspension until the end of November.

“It is the first step. We hope that Mutu will not pay because he has already paid so much by not playing for several months and losing money.”

The 30-year-old player labelled the fine as a “great injustice,” but will be pleased on hearing that the decision has been – temporarily, at least – overturned.

Chelsea are back on top of the Premier League after seeing off Liverpool 2-0. See how this has changed the outright betting here.