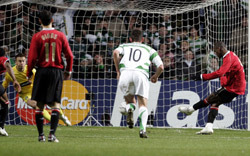 Reds to top group C? Liverpool & PSV will be fighting for the top spot tonight. Click here for the latest Champions League odds.

“Neville came over and said ‘I think he’ll miss it – his head’s gone down’,” said Celtic midfielder Lennon.

“Saha had an earlier miss and that’s when his head had gone down.”

United striker Saha wasted a wonderful opportunity shortly before the penalty miss when he attempted to flick the ball over the onrushing Boruc.

The keeper admitted: “Penalties are a lottery.

“I just had more luck than the guy who was trying to score. I remembered the penalty when he scored against me. It was in the same corner.

“I thought he might try and so the same again. I was not sure it should have been a penalty in this game either.

“I have made some better saves in my life, but that is one of the most important.”

“He is obviously disappointed to miss the penalty but the players will help to lift him because we are all together at this club.

“There are no problems with the boy. I am sure he will miss another penalty in his career at some point.

“Understandably, the players are disappointed. We have five days to lift them but if we want to win the league we have to show character and I am sure we will.”

Ferguson admitted he was stunned after seeing his side go down to their second successive Champions League defeat.

“To be honest, losing this game is very hard to take,” he said.

“We didn’t do enough in the last third of the field and that is what can happen in football if you don’t take your chances.

“It is disappointing because we have thrown it away by not scoring goals to win the match.”

“I am in shock,” added Ferguson.

“Our home form has been very good.

“I have no worries on that score. We have to be a bit more aggressive and take our chances.

“Unfortunately we have a couple of big matches to play before then. We can focus on those and put the Champions League on the back burner.”

Reds to top group C? Liverpool & PSV will be fighting for the top spot tonight. Click here for the latest Champions League odds.