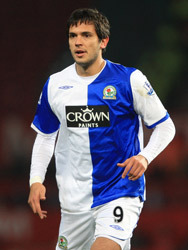 After scoring five against West Brom in midweek league leaders Man Utd will be hoping for more of the same when Everton come to Old Trafford this Saturday.

Manchester City manager Mark Hughes has confirmed that the club’s latest offer for Roque Santa Cruz, reported to be £18.5m, has been turned down by Blackburn Rovers.

”Yesterday (Thursday) afternoon we put an improved bid to Blackburn for Roque Santa Cruz but it was rejected,” said Hughes.

After hitting an impressive 23 goals in his first Premier League season interest in Santa Cruz increased, as did Rovers’ valuation of a player they bought from Bayern Munich for £3.5million in July 2007.

While Santa Cruz is keen to reunite with Hughes he refuses to demand a transfer, telling The Daily Telegraph: “While I’m a Blackburn I can’t talk to anyone at City. I only know what everyone else knows: that they are interested in me but that they haven’t yet come to an agreement with Blackburn.

“My agent has been contacted by other clubs, but the fact is that Mark Hughes is a manager I know. He knows me, and I know what he expects.”

Hughes confirmed City were still considering whether to increase their offer for the Paraguayan.

Blackburn manager Sam Allardyce confirmed that Rovers had rejected the latest bid for Santa Cruz, saying: ”Yes, they (Manchester City) have made another bid.

”We have considered it and it’s not been accepted. They have been unsuccessful. But whether they come back before Monday’s 5pm deadline, I’ve no idea.”

After scoring five against West Brom in midweek league leaders Man Utd will be hoping for more of the same when Everton come to Old Trafford this Saturday.