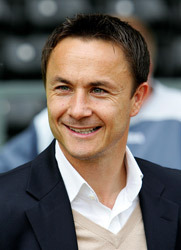 Man Utd and Arsenal remain locked at the top of the Premier League, both on 54 points, with Chelsea just 4 behind. Click here for the latest betting odds!

Newcastle United have confirmed that Dennis Wise has been appointed as an executive director of the club.

Wise quit Leeds United on Monday to take up a new position with Newcastle and the club have now confirmed his job title.

Newcastle have confirmed Wise alongside two further additions to their management team.

Tony Jimenez has been confirmed as vice-president – but he will play a major part in player recruitment along with new technical co-ordinator Jeff Vetere who previousy worked as a scout for Real Madrid.

“This is all part of the vision that recently helped us to secure Kevin Keegan’s return to the club as manager,” said chairman Chris Mort.

“Two of the conclusions of our strategic review, since acquiring the club, were that the club would benefit from having a football person involved at board level, which it has not had historically, and that further senior resources are needed for recruiting players of the highest quality from this country and further afield.

“Dennis would like to move away from day-to-day football management to a board role and, with his considerable energy and intelligence, we believe he will do very well in this new position.

“With Kevin able to devote his efforts to developing and running the first-team squad, Dennis, Tony and Jeff will each help us to secure success for Newcastle United football club at all levels and for the long-term. One or two further key appointments will follow in the months ahead.”

Man Utd and Arsenal remain locked at the top of the Premier League, both on 54 points, with Chelsea just 4 behind. Click here for the latest betting odds!