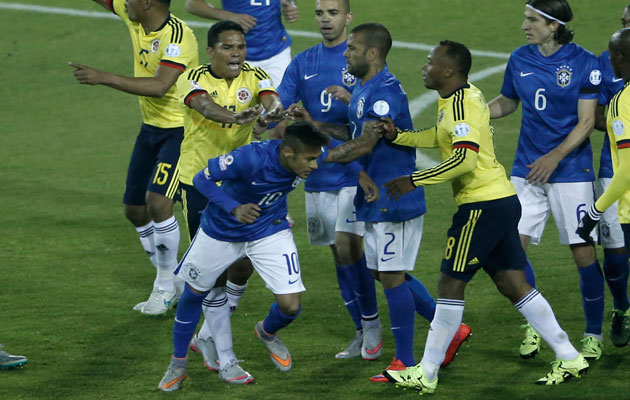 Brazil coach Dunga was left fuming by the performance of the referee, Enrique Osses, after the Chilean official sent Neymar off at the end of Wednesday’s ill-tempered defeat by Colombia at the Copa America.

Colombia won the match 1-0, leaving Brazil needing a result from their final Group C match against Venezuela to guarantee a place in the knockout stages.

Neymar, who was booked by Osses just before half-time and then shown a red card after the final whistle, amid chaotic scenes involving virtually every player from each team. Colombia’s Carlos Bacca was also shown a red card and will miss his side’s final group game against Peru.

“It’s never a good thing when at the end of a match we’re talking about the referee,” Dunga said. “I think if you look at what happened, including at the end, you have to conclude it has something to do with the referee.

“There was a similar problem at a Corinthians match when the same referee was in charge,” Dunga said, referring to a recent Libertadores Cup tie when Osses sent off two Corinthians players in a match against Paraguayan side Guarani. “It’s more than just coincidence.”

Asked how he would prepare for the Venezuela clash without Neymar, Dunga said: “We’ll think about that tomorrow. We’ve played matches before without Neymar. We’ll just to play in a way that makes up for his absence.”

Dunga said the Colombians had provoked his side and that Brazil did not resort to such tactics.

His counterpart, Jose Pékerman, refused to criticise Osses, recalling instead, that last year’s tempestuous World Cup clash between the two sides was also characterised by some controversial refereeing decisions. Neymar was stretchered off in that match with a fractured vertebrae, while Colombia had a goal disallowed.

“Generally, I don’t speak on referees. Sometimes we had to lose and we’ve never talked about a ref,” Pekerman said.

“On the contrary, I was measured in the game Colombia lost [to Brazil] in the World Cup where it was a great debate over some mistakes, which might damage Colombia.

Colombia’s goal was scored in the first-half by Jeison Murillo, giving his side only their second victory in 10 Copa America encounters against Brazil.