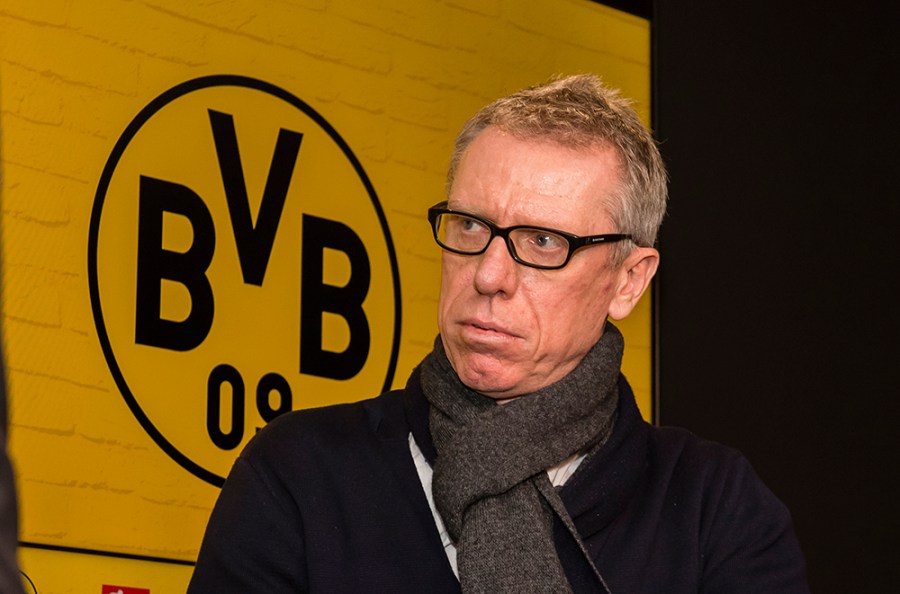 Desperate times, desperate measures. How else to describe Dortmund’s decision to sack Dutch coach Peter Bosz, who had not won in the Bundesliga since late September and replace him with Peter Stöger, who prior to being axed by Cologne last week, had only garnered two points from the Rhinelanders’ first 13 matches of the season.
Bosz, whose last game in charge was a 2-1 capitulation at lowly Werder Bremen, simply ran out of road and time. Dortmund set themselves the highest of standards and a disastrous streak of just one win in 14 competitive fixtures was bound to signal doomsday.
Only appointed in the summer, Bosz’s reign at the Westfalenstadion began most impressively, his team ripping opponents apart with their bravura attacking and going five points clear at the top of the table after seven rounds.
Then the dramatic disintegration; the abrupt loss of form of chief striker Pierre-Emerick Aubameyang, the chronically-shoddy defending, the all-conquering spirit suddenly morphing into dread and hesitancy.
The net result? Disappointment across the board. Champions League elimination – failing to win a single match in the group phase – and no end of dropped points in the Bundesliga, leaving them currently marooned in eighth, a colossal 13 points behind leaders Bayern Munich and five adrift of RB Leipzig in second-place.
What essentially sealed Bosz’s fate was his tunnel vision, his determination for his side to always be on the front foot. As long as Dortmund were throwing men forward in ever increasing numbers, he was happy, seemingly oblivious to their vulnerabiity at the back.
That the Dortmunder see Peter Stoger – who has been handed a six-month contract – as their saviour has left many perplexed. Yes, the Austrian achieved a great deal in his four-and-half-years in Cologne, notably masterminding their promotion to the Bundesliga in 2013-14 and securing Europa League qualification last season, the club’s first taste of continental action in 25 years. But undoubtedly has had his reputation tarnished by the flatlining form of the Billy-Goats this term.
No other team in Bundesliga history has ever started a campaign so abysmally and unable to spark the merest hint of a revival, Stoger looked a beaten man look before the axe finally fell. Questions inevitably have to be asked if he is in the right frame of mind for any coaching post, let alone one as challenging as that which awaits him in Dortmund.
The harsh fact is that he has suffered even more defeats of late than the Dortmunder. Is a coach low in confidence himself, really the best candidate to instil belief in a faltering outfit ?
Needless to say, the Dortmund top brass (CEO Hans-Joachim Watzke and general manager Michael Zorc) see Stoger’s arrival in a completely different light. Both are long-standing admirers of the Austrian’s ability to organise and solidify and arguably that’s exactly what the “Schwarz-Gelben” need right now.
Watzke and Zorc are not expecting Stöger to perform miracles. Just to steady the ship and buy them some time. Nothing more than that.
What We Learned This Week
1. Veh to go.
Rumoured to be a candidate for the position of Dortmund caretaker coach, the much-travelled Armin Veh – a Bundesliga winner with Stuttgart in 2006-07 – has put pen to paper as the new general manager at dead-last Cologne. He admits he is already planning for life in the second division and certainly will not have changed his mind after his first game in the job, a 4-3 defeat at home to Freiburg. Absolutely nothing is going to plan for the Billy-Goats at the moment, blowing a three-goal lead and twice conceding in second-half stoppage-time.
2. White-out
Julian Nagelsmann was one unhappy man after his side slipped to a 2-0 loss at Hannover, a game which was played in a snowstorm. “There were many occasions when the ball just wasn’t moving,” said the German Coach of the Year for 2017. “These were irregular conditions and have nothing to do with football. The match was turned into a game of chance. What’s more as we were wearing white shirts, we had all sorts of problems picking each other out. This makes no sense.”