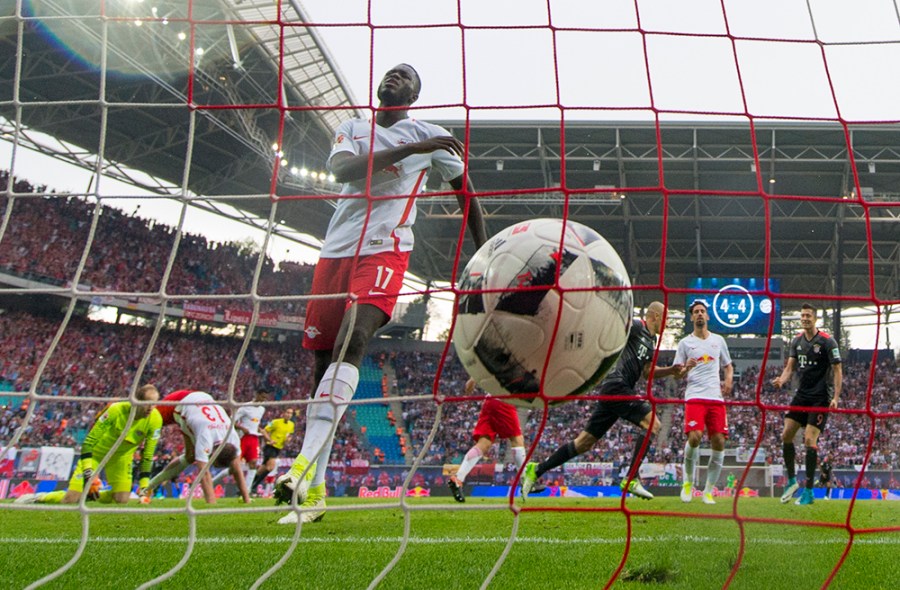 Thrills, spills and goals, goals, goals. The penultimate round of the Bundesliga turned out to be a spectacle from start till finish: 38 goals in all (the biggest single matchday total this season);  an abundance of eleventh-hour action and a pair of hell for leather, heavy-scoring slugfests; Hoffenheim winning 5-3 in Bremen and Bayern pulling off the mother of all comebacks in their 5-4 victory at RB Leipzig.
Four-two down at the Red Bull Arena as the clock ran down, Bayern’s late, late rally was the work of the master escapologist, a Robert Lewandowski header reducing the deficit on 84 minutes, David Alaba restoring parity with a superb free-kick, then Arjen Robben netting a brilliant solo winner in the fifth minute of stoppage time.
Bayern have managed no fewer than seven post-90 minute goals this term. Cynics attribute the phenomenon to compliant officials; the Bayern Nation prefer to call it will-to-win.
With the dye already cast in the title race – Bayern already crowned victors and RB guaranteed the runners-up berth – this top of the table clash, should, in theory, have been a dead rubber. But for Bayern in particular, here was a game they dare not lose, one with an enormous amount of pride and prestige at stake.
Fuelled by their huge financial resources and Wolf of Wall Street ambition, RB make no secret of their desire to one day topple the Bavarians from their domestic throne. Bayern, of course, aim to preserve the status quo at all costs. To keep the newly-promoted upstarts firmly in their place.
“When a number one team comes up against its closest rival, you have to prove you’re the best,” declared Robert Lewandowski after the game. “And we did that. It doesn’t matter that we didn’t start the match well.”
In some ways, the Leipziger only had themselves to blame. Coach Ralph Hasenhüttl’s decision, late in the game, to withdraw his three marksmen (two-goal Timo Werner, Marcel Sabitzer and Yussuf Poulsen), simply invited Bayern to pile on the pressure and in the second-half, a rather cocky RB were a little too inclined to ridicule Bayern, playing to the gallery with a prolonged spot of keep-ball.
“Maybe they shouldn’t have provoked us,” said Bayern attacker Thomas Muller, whose introduction a little after the hour-mark, did so much to enliven his side. “We wanted to get our own back.”
Leipzig was not the only place to witness dramatic reversals of fortune. Long embattled Mainz secured their top-flight status by turning a two-goal deficit into a 4-2 victory over local rivals Eintracht Frankfurt, while Hamburg kept their survival hopes alive thanks to a late Pierre-Michel Lasogga equaliser in a 1-1 draw at Schalke.
Hamburg’s home game with Wolfsburg next weekend could not possibly have more riding on it. Anything less than a HSV victory and they will be facing their third relegation play-off in four years. Should Hamburg win, either the Wolves or Augsburg will be duelling in the last-chance saloon.
What We Learned This Week
1. Auf Wiedesehen Ingolstadt
As many had expected after FCI took almost three months to record their first Bundesliga win this season, the ‘Schanzer’ finally fell through the demotion trapdoor. Not that coach, Maik Walpurgis, deserves any of the blame. Ever since taking over from the sacked Markus Kauczinski in November, the team’s results have improved beyond all recognition, winning eight games, including three in a row last month against relegation rivals, Mainz, Augsburg and Darmstadt. ” I can only compliment my lads, ” said a disconsolate Walpurgis. ” What I have here is a team of great character and spirit. I tip my hat to them. “
2. Woe is Weigl
One of the most promising young midfielders in the country, Dortmund passing machine, Julian Weigl, will be one the sidelines for three or four months after breaking his right ankle in the 1-1 draw with Augsburg at the weekend. No German Cup Final for the ill-fated 21-year-old. No Confederations Cup trip to Russia with the Nationalmannschaft. Inevitably, the other major talking point at the Westfalenstadion is the future of coach Thomas Tuchel, whose relationship with the board has sailed into decidedly choppy waters. One candidate for the hot-seat could be ex-Hertha Berlin and Gladbach boss Lucien Favre, currently working wonders at Nice. Another is Hannes Wolf, the leader of second division leaders, Stuttgart.