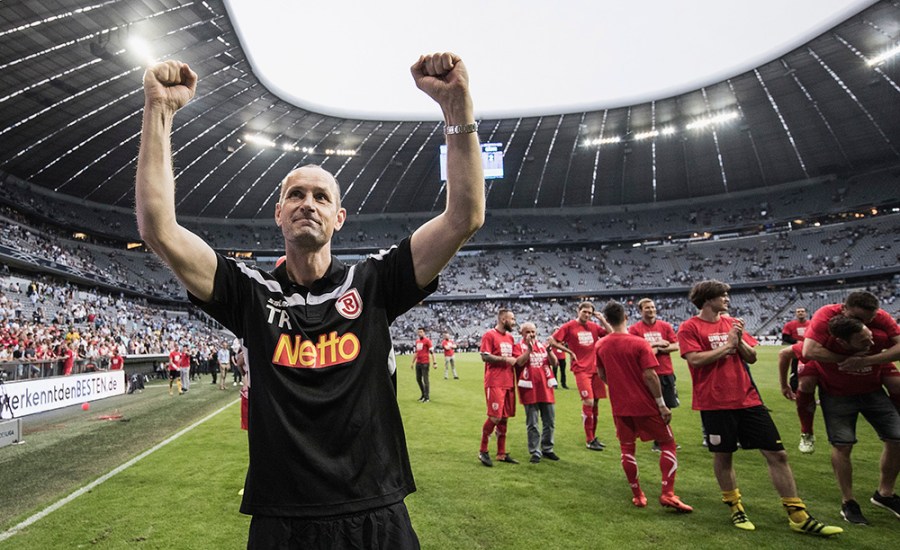 Taking their lead from the stupendous success last term of young Hoffenheim boss Julian Nagelsmann, more and more Bundesliga clubs are plumping for new wave technical area talent, putting their faith in coaches who have never managed in the top sphere.
Sandro Schwarz, formerly responsible for Mainz’s Under 23s, will be the club’s first team “Trainer” next season. Following Leverkusen’s fall from grace – trading their usual top-four berth for a brush with relegation – the Rhinelanders have handed their reclamation project to elite rookie Heiko Herrlich. Schalke have appointed 31-year-old Domenico Tedesco, a young man with only the bare minimum of pro leadership experience: 11 games in charge at second division Erzgebirge Aue.
Not so long ago, every Bundesliga coaching vacancy automatically was filled from the most restricted of pools, a closed shop of veterans resting between jobs. Thankfully, though, the recruitment process now allows for creativity and thought. Directors of sport are casting the net wider. Left-field options are all the rage.
Schalke’s decision to replace the sacked Markus Weinzierl with Tedesco undeniably is a bold call. But that doesn’t make it a shot in the dark either. Thanks to good work with the Stuttgart and Hoffenheim youth teams, Tedesco already was forging a solid reputation and in just three months in Aue, produced a minor miracle: demotion death bed one minute, survival the next.
Tedesco’s strongest points? His excellent communication skills, strategic flair, attacking instincts and eye for detail. “It’s incredible the amount of information he gives us on our opponents in video sessions,” says Erzgebirge midfielder Clemens Fandrich. “I could watch a game eight times and still not spot what he sees.“
Born in the southern Italian region of Calabria but resident in Germany since the age of two, Tedesco certainly appears to be made of the right stuff. Indeed he was top of the Pro Licence class in the 2015-16 intake at the German Coaches School, posting better marks than good friend and fellow undergraduate Nagelsmann.
All, ultimately, will depend on how Tedesco copes with the uniquely volatile atmosphere at Schalke. The Gelsenkirchener are infamous for turning dramas into crises and when it comes to coaches, rarely show patience, with each of their last two incumbents (Andre Breitenreiter and Markus Weinzierl) lasting a mere 12 months.
Out of Europe for the first time in seven years, Schalke are desperate for an immediate upgrade and right from the start, the pressure will be on the Italo-German to deliver. That’s the way it is Schalke. High Noon every week.
While Tedesco only played at amateur level, new Leverkusen boss Heiko Herrlich, now 45, enjoyed an altogether different type of athletic career – that of the star striker. After making his pro breakthrough at Leverkusen, he piled up the goals for Gladbach and Dormund, won Bundesliga and Champions League titles with the latter and earned a handful of caps for the Nationalmannschaft.
He has coached various German representative elevens as well as Bochum, Unterhaching and Bayern Munich juniors. But would have especially impressed the Leverkusen brass with his outstanding results over the last two seasons at Jahn Regensburg, taking them from fourth to second tier in short order.
“Although some might find our choice of Heiko a little surprising, I noticed, when talking to him, that he had a burning desire for this job,” declared ‘Werkelf director of sport Rudi Voller. “He wants to play aggressive and winning football. I’m convinced he’ll take our players forward.”
What We Learned This Week
1. Better late than never
At 29 a relatively old international newcomer, Hoffenheim front-man Sandro Wagner marked his competitive debut with a hat-trick in the 7-0 hammering of San Marino in a World Cup qualifier in Nürnberg. Wagner, something of a bustling old school type of centre-forward, often has been thought of as too unrefined for the sophisticated style of Germany coach Joachim Löw. But with quality homegrown strikers in short-supply in the Bundesliga and Wagner scoring freely for Hoffenheim, Low simply couldn’t turn him away. Wagner always was going to be ready for the challenge. “For me, I’ve been the best German striker for a while now.”
2. Gnabry: in and out
As predicted when he moved from Arsenal to Werder Bremen last summer, brilliant young German winger Serge Gnabry eventually has ended up at Bayern Munich, moving to the Allianz-Arena in a 10 million euro deal. That said, Bayern are unlikely to field him straight away, preferring to send the 21-year-old out on loan for a season. The word is that high-flying Hoffenheim will be the beneficiaries.