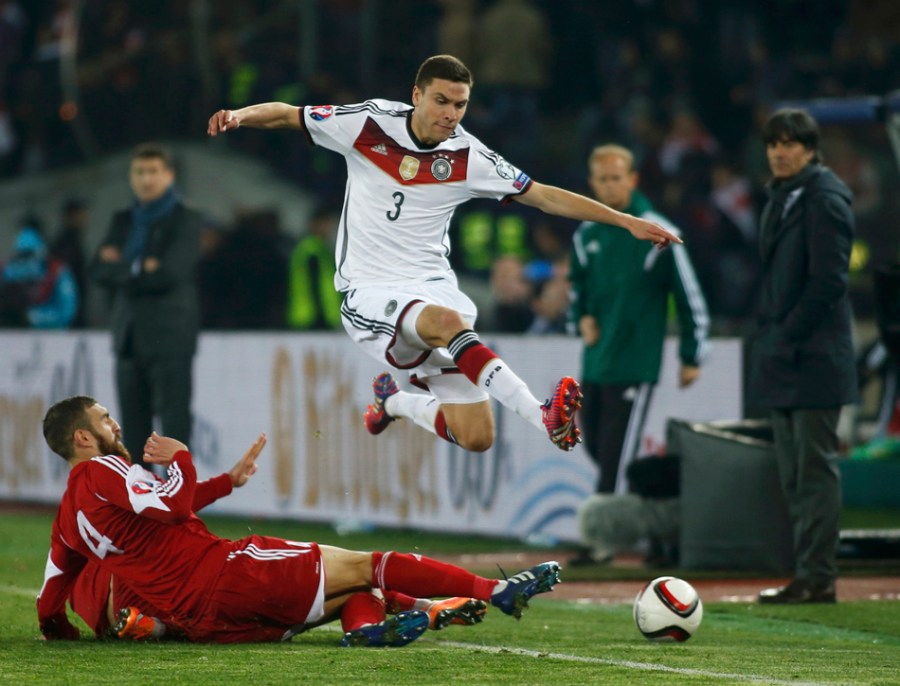 1) Germany’s full-backs: the ups, the downs
“We’re not yet back on track and have to improve,” declared brutally honest Nationalmannschaft captain Bastian Schweinsteiger after his side’s comfortable 2-0 Euro 2016 qualifying win in Georgia on Sunday. Nowhere does the work-in-progress tag apply more than the full-back position, where Hoffenheim’s Sebastian Rudy and Cologne youngster Jonas Hector still have an awful long way to go to prove themselves worthy. Handed the poisoned chalice of replacing ex-national team monument Philipp Lahm at right-back, Rudy had a game to forget in Tbilisi, visibly nervous, poor in his distribution and too inclined to switch off. Essentially he looked what he is: a midfielder filling in at full-back.  Only appearing in his fourth full international, Hector made a better fist of it on the opposite flank and at least passed the ball accurately, but inevitably for a rookie, did look a little short in the initiative and self-confidence departments. Will the 24-year-old be the solution to Joachim Low’s long-standing problems at left-back? Far too early to say.

2) A German Bosman?
Expect plenty of fall-out following the decision of a German court to side with veteran Mainz keeper Heinz Muller in his battle with his club over his contractual status. German common law states that after two years working at the same organisation, an employee has the right to have his contract transformed into a permanent one. So when Mainz refused to offer the 36-year-old a new deal when his current contract expires at the end of this season, the custodian duly trotted down to the courts, where they duly did the necessary. Instead of offloading a player they no longer needed, Mainz now find themselves in something of a bind. Müller remains legally on board and only in certain circumstances (employee resignation, a sacking for misbehaviour, retirement or mutual agreement) can the bonds be broken. The phrase “can of worms” springs to mind.

3) Bayern talk galactico
All those who despair at Bayern Munich’s utter dominance of the Bundesliga would have felt even more disillusioned when Bayern Munich finance chief, Jan-Christian Dreesen admitted in an interview with Kicker magazine that his club would be prepared to pay a stratospheric 100 million euro transfer fee for the right top-quality player. Besides seeing a nine-figure acquisition in his crystal ball, Dreesen also expressed his unhappiness with the amount of TV money in Germany: “We’re the country of the world champions and have a very attractive league. Yet out of the top-four championships in Europe, we get the smallest pot.”

4) Hamburg target Tuchel
Provided HSV are not relegated, it seems increasingly likely that highly-rated ex-Mainz coach, Thomas Tuchel will end up in the northern club’s technical area. Hamburg’s go-getter president Dietmar Beiersdorfer revealed to Bild am Sonntag that he had been in extensive contact with Tuchel, while supervisory board chairman Karl Gernandt informed a local TV station that headhunting talks had been “very, very intensive and thorough”.

5) It only pours at Hannover
Consistently out of luck on the field of play this year, free-falling Hannover suffered a further blow with the announcement that key midfielder and skipper, Lars Stindl will be leaving in June for Borussia Monchengladbach, who successfully triggered a 3 million euro release clause in his contract.  With Gladbach’s German international, Christoph Kramer returning to mother club Leverkusen in the summer, the choice of the much underrated Stindl to fill the void in the Foals’ engine room makes perfect sense.