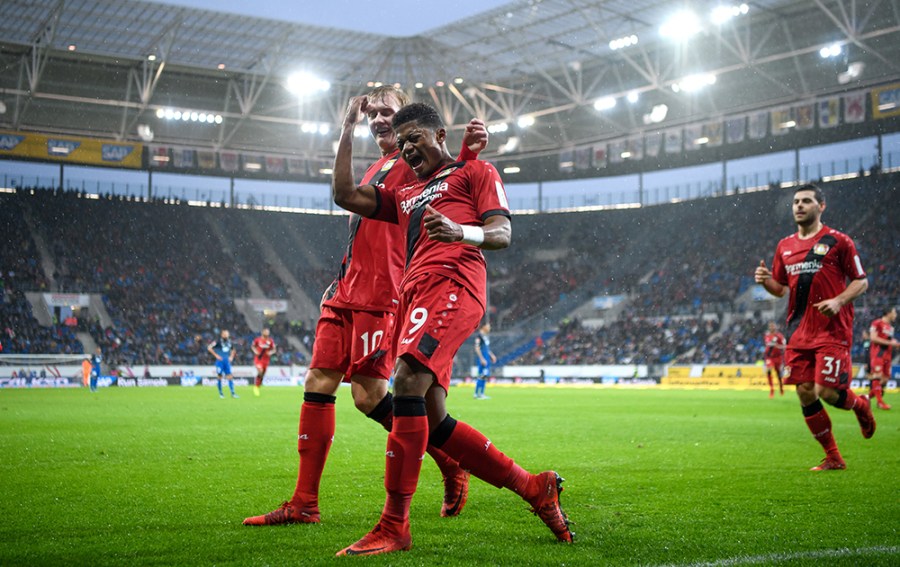 Nick Bidwell’s Notes from Germany
No Bundesliga player – not even the A-listers at runaway leaders Bayern Munich – are shining brighter right now than Leverkusen’s brilliant Jamaican winger Leon Bailey.
The 20-year-old, bought from Belgian club Genk for 13.5 million euros in the January 2017 transfer window, has proved a blue riband performer in a red shirt, a key factor in Leverkusen’s concerted push this term for Champions League qualification.
Little wonder the West Indian has become European hot property. At home on either flank, he is the complete package, an explosive mix of lightning pace, rubber-limbed dribbling contortions, classy creativity and finishing power.
Surprisingly for one so young, he also brings a great deal of maturity to proceedings. He has a good positional game, does his share of tracking back and undoubtedly has a feel for the collective good, serving up goal upon goal for grateful teammates.
So omnipresent is he for the resurgent ‘Werkself’ that he seems to be pulling concurrent day and night shifts.
Put simply, he is the type of individual who makes things happen and certainly was inspired when netting with an outrageous back-heel in a 4-1 domestic league win at Hoffenheim. An otherworldly piece of artistry.
“It was an instinctive effort,” declared a beaming Bailey afterwards. “I didn’t have any other choice as I had my back to goal. I knew where the goal was. It wasn’t going anywhere.”
Bailey’s story is the archetypal rags-to-riches chronicle. Growing up on the mean streets of Cassava Piece, a down-at-heel district of Jamaica’s capital Kingston, the young Leon quite possibly could have been sucked into a world of gangs and crime. Yet thanks to football, found a way out, first coming to Europe at the age of 15 and eventually creating a bridgehead for himself in Austria (USK Anif and FC Liefering), Slovakia (AS Trencin) and Belgium (Genk).
“Leon is very important for us,” says fellow Leverkusen wide-man Julian Brandt. “He’s often our tin-opener, the guy who opens the scoring or comes up with the winner. In this sort of form, he’s worth his weight in gold.”
What We Learned This Week
1. Crying Wolf
The seventh coach to bite the dust in the Bundesliga this term, Hannes Wolf has parted company with free-falling Stuttgart.  Just eight months ago, Wolf – a former reserve team boss at Dortmund – was basking in the glory of a second division title triumph. But with the Swabians losing seven of their last eight games, he had no place left to hide. “We had to act before it was too late,” said Stuttgart director of sport Michael Reschke. “We need to build up some momentum, to return to winning ways.”
2. Out for the Cup.
In a nightmarish start to the New Year, RB Leipzig and Germany left-back Marcel Halstenberg faces a lengthy spell on the sidelines after being carried off his club’s training ground with ruptured cruciate ligaments in his left-knee. Not only will the 26-year-old miss the rest of the current Bundesliga campaign; his World Cup 2018 dream has gone up in smoke too. Halstenberg only made his debut for the Nationalmannschaft last November, marking the occasion with a solid performance in the goalless friendly against England at Wembley.