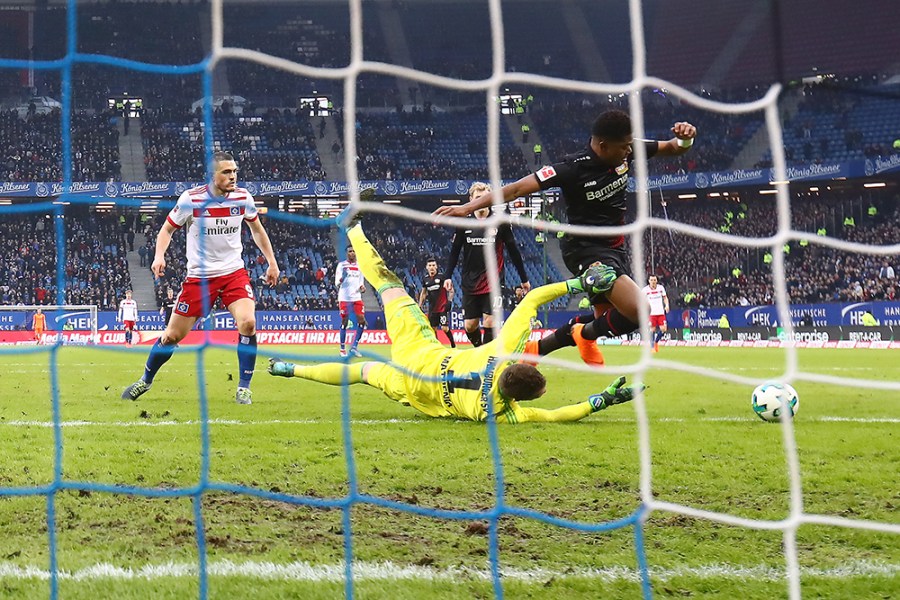 “Before time runs out, we’ll be hunting you through the city ” The tag-line from a Hollywood action-hero blockbuster? No, just Hamburg fans deploying a banner to threaten their own players during a 2-1 home loss to Leverkusen.

While such mindless rhetoric never can be acceptable, no one should be surprised that a certain number of Hamburg hot-heads have gone way too far. HSV, the only team to have played in every Bundesliga season since the league was founded in 1963, are on the brink of their first-ever relegation, a perilous state of affairs which has left everyone at the Volksparkstadion looking to apportion blame.

Over the past few years, Hamburg have specialised in dodging the bullet, winning relegation/promotion play-offs in 2013-14 and 2014-15 and only staying up last season thanks to a last-ditch win over Wolfsburg on the final weekend of the campaign. However few are expecting another eleventh-hour miracle.

Defeat at the hands of Leverkusen was HSV’s tenth league game without a win and now six points off safety, they are very much running out of time to haul themselves clear.

Worrying times indeed for newly-appointed ‘Rothosen’ (Red Short) coach Bernd Hollerbach, who since taking over from the sacked Markus Gisdol in late January, has seen his side pick up a mere two points. For all Hollerbach’s fighting talk, the symptoms of decay very much remain: the lethargy, the fear, the crass defending, achingly-slow transitions and powder puff front-line.

Whether it be coaches, players or administrators, HSV has become the German footballing equivalent of a black hole, a dank, depressing place where competence and solid reputations suddenly begin to shrivel.

Not one of their three major summer signings (winger Andre Hahn, keeper Julian Pollersbeck and centre-back Rick van Drongelen) has made a significant contribution and inevitably director of sport Jens Todt is feeling the heat.

With the second division looming, nerves are becoming frayed in the boardroom too. The club’s chief financial backer, businessman Klaus-Michael Kühne, has criticised management for ignoring the January transfer window and according to local media reports, an abortive coup recently took place, a failed attempt to force out Todt and chief executive Heribert Bruchhagen.

The pair are not likely to last long though. Newly-elected HSV president Bernd Hoffmann – who from 2003-2011 was the club’s CEO – wants some big-name faces alongside him and may be tempted to bring in former Hamburg playmaker and coach Felix Magath or ex-Hannover and Koln sporting director Jorg Schmadtke.

“Carrying on as before cannot be option,” says Hoffmann. “We have to reverse the trend. If we do go down, we’ll cry our eyes out for a week. Then we’ll pick ourselves up and write a new chapter in the club’s history.”

What We Learned This Week
1. Lay it again.
Borussia Mönchengladbach are to completely relay their pitch after a recent league game with Dortmund (a 1-0 defeat) effectively was ruined by the poor state of the turf. Two of the most technical sides in the Bundesliga should have produced a genuine spectacle. Instead, a farce ensued, with players continually slipping and slick combination play rendered impossible.”For a while it was like an ice skating contest,” said Dortmund attacker Mario Gotze. “The pitch was almost as good as in my garden.”

2. Shape up or ship out.
Undermined this season by a loss of form and a persistent groin injury, Schalke’s Algerian midfielder Nabil Bentaleb has been told by Royal Blue management to improve his attitude. “If we win 5-0 and Nabil only plays for half-an-hour, he then behaves as if we’d lost 5-0,” declared Schalke director of sport Christian Heidel. “If everybody reacted like that, we’d have a really big problem. He has to change. That’s the only way.”