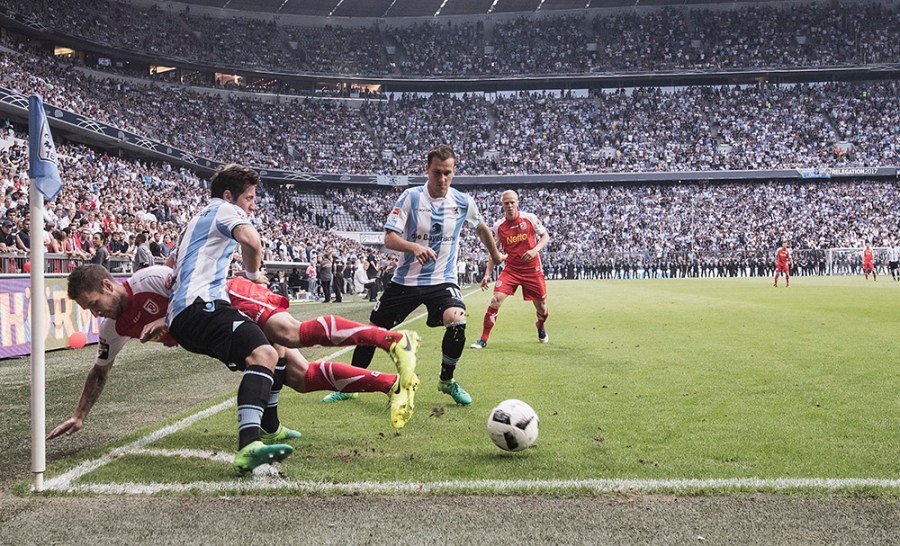 One of Germany’s best-supported and historically-significant clubs, 1860 Munich, faces an existential crisis following yet another season of disastrous performances on the field of play and shambolic stewardship off it.
1860, one of the founding members of the Bundesliga in 1963, were relegated last month from the second division – their fate sealed by a 3-1 aggregate play-off loss to Jahn Regensburg – and then made a dreadful situation even worse by failing to come up with the money for their third tier licence.
League statutes say no pay, no play and Die Löwen (The Lions) could well be demoted further, this time to the Bavarian group of the ‘Regionalliga’, the fourth floor of the domestic pyramid.
With professionalism confined to the top three leagues in Germany, the bulk of the 1860 squad is likely to take the high road and though the club has an excellent youth scheme, it would be unrealistic to expect kids to spark the hoped-for renaissance.
Uncertainty currently rules at 1860. Although the club’s principal investor, Jordanian businessman, Hasan Ismaik, insists he will stay, thoughts of making tracks must be tempting him, while media sources in Munich claim that wages have gone unpaid and that the club’s accounts have been cleared out.
A reduction in TV income of around five million euros is a huge blow indeed, sponsorship cash is likely to dry up and they probably will have to cut their hosting costs accordingly, swopping  the Allianz-Arena – which they share with Bayern Munich – for their old Grunwalder Strasse stadium.
For the vast majority of ‘Sechiziger’ fans, the villain of the piece is Ismaik, On arriving at the club in 2011, he cast himself as the white knight, the man to clean up their financial woes and lead them to top-flight promotion and the Champions League. But when push came to shove, he was simply unable to deliver.
Turmoil and bad news in every shade of Sky Blue. Frequent miscalculation in the transfer market (such as the 2.5 million euros wasted on Brazilian striker Ribamar last summer), relegation struggles in each of the past three years, a revolving door of coaches (13) and presidents (7) and four chief executives this term alone, including ex-Liverpool administrator Ian Ayre, who lasted just a couple of months before quitting on the morning of the second-leg versus Regensburg.
How sad to see this Bavarian institution in such straits. Prior to Bayern’s emergence as a domestic and European force in the late 1960s, the Sky Blues were Munich’s number one outfit, notably coming runners-up in the 1964-65 Cup-Winners’ Cup – losing at Wembley to West Ham – and  winning the Bundesliga the following year.
The 1860 faithful see themselves as the true beating heart of the game in Munich, the non-corporate face of football in the city and good fortune or ill, they resolutely stand by their club. The proof ? The 60,000 packed into the Allianz-Arena for the second-leg of the do-or-die Regensburg encounter.
Tough times ahead for Die Lowen. Will they roar again ?
What We Learned This Week
1. Bosz unveiled
After parting company with coach, Thomas Tuchel, Dortmund have plumped for a Dutch replacement in Peter Bosz, who recently guided an effervescent young Ajax side to the Europa Leage final. “We’re convinced he’s the right man for us,” declared BVB general manager, Michael Zorc. “He represents fresh and attractive attacking football, a distinctive way of keeping possession and a very strong pressing game. There’s a great balance in his philosophy.”  Dortmund are thought to have agreed to pay some three million euros in compensation to Ajax.
2. San Siro bound
The subject of much transfer speculation of late, Wolfsburg’s Swiss international defender, Ricardo Rodriguez, has left the VW outfit for a new life in Italy, signing on the dotted line for Milan. Linked in the past with Manchester United and Real Madrid, the 24-year-old has been dancing with the Wolves for the past five-and-a-half seasons and has cost the ‘rossoneri’ 18 million euros. He has spent most of his career as a rampaging left-back, but for much of last season was used in central defence, a position he much prefers.