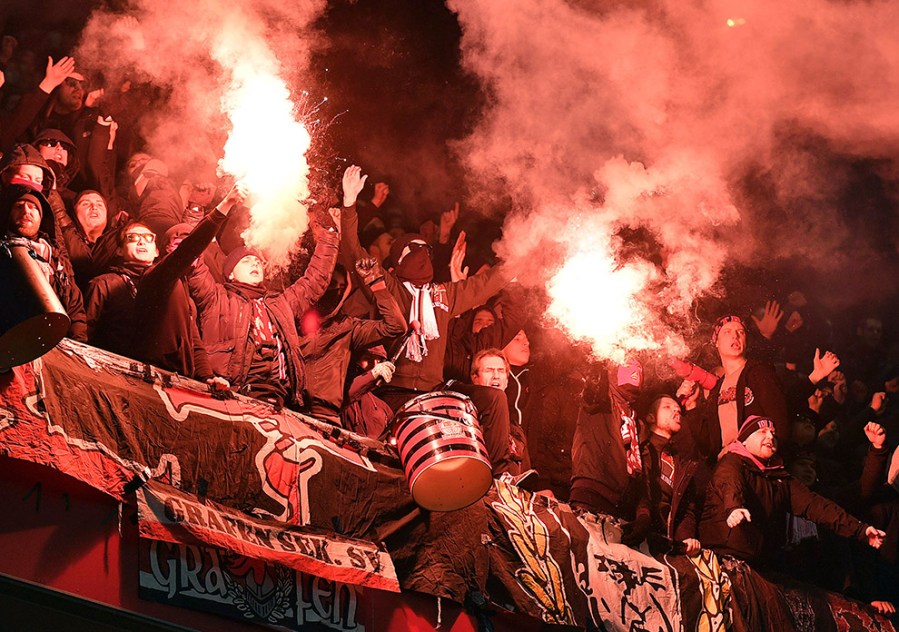 In stark contrast to the usually omnipotent force that is the Nationalmannschaft, German clubs are finding it far tougher to make a living in the export business.
With Bayern Munich and Dortmund trudging to the Champions League exit last week and Schalke experiencing the same sinking feeling in the Europa League, for the first time in 12 years, there will be no German presence in a continental semi-final and for a country of such high footballing expectations, that is a severe shock to the system.
Not since 2008-09 has one of Deutschland’s finest failed to make the last four of the Champions League and the number of club coefficient points racked up by German sides in Europe this season is at a five-year low.
German players don’t normally do inferiority complexes. But they definitely do bend the knee to their Spanish masters. Bayern have been knocked out by La Liga opponents in each of the past four years, while in terms of Euro trophies, the balance of power tilts decidedly towards the Iberians, Spain claiming 17 titles in the past two decades to Germany’s two (Bayern’s Champions League triumphs of 2001 and 2013).
As an enterprise, the German League (the DFL) has much to recommend it, not least the record three billion turnover posted by the Bundesliga last season and its excellent marketing forays into China. However on the field of play, they clearly have lost a step or two.
“From a foreign perspective, they judge a championship primarily on the international performances of its clubs,” says DFL chief executive Christian Seifert. “We haven’t had a German side in the semi-final of the Europa League in seven years. That’s not exactly something to write home about.”
The biggest problem for the Bundesliga is its lack of strength in depth. Year on year, Bayern have the domestic title wrapped up by Christmas and up until this season – with the advent of nouveaux riche interlopers, RB Leipzig and Hoffenheim – the Big Two of Bayern-Dortmund have not had to stretch themselves. Dominating at a canter.
Such recent Champions League participants as Wolfsburg, Leverkusen, Schalke and Borussia Monchengladbach are all currently found in the bottom half of the table and in what many see as sign of mass mediocrity, only ten points or so separates the relegation zone from the top six.
Especially worrying is the insubstantial quality of many of the teams pushing for a Europa League spot. Despite losing eight away games in a row, Hertha Berlin are still a high-flying fifth. Freiburg have scored just 38 goals in 30 games this season. And not even a ten-match winless streak this year has derailed Eintracht Frankfurt.
Bayern, Dortmund, Leipzig and Hoffenheim will not only be representing themselves in Europe next season. They will be playing for Germany. For its reputation as a round ball A-lister.
What We Learned This Week
1. Kruse in control
The scorer of all his team’s goals in the 4-2 win at Ingolstadt on Saturday, Werder Bremen attacker, Max Kruse, must now be in contention for a recall to the Germany squad. Infamous for his social life escapades, Kruse was unceremoniously axed by Bundestrainer Joachim Low last year. But since swopping Wolfsburg for first club Bremen last summer, has slowly but surely regained his mojo, fighting back from an early season ankle injury and proving both a top-class marksman and chance-maker.
2. Berlin not Beijing
Following a suggestion from influential Adidas CEO, Kasper Rorsted, that the German Cup final be staged overseas – possibly in China – federation president, Reinhard Grindel has made a public commitment to keeping the event in Berlin, its permanent home for the past 32 years. “Berlin’s Olympic Stadium has become our version of Wembley – a living legend,” said Grindel.