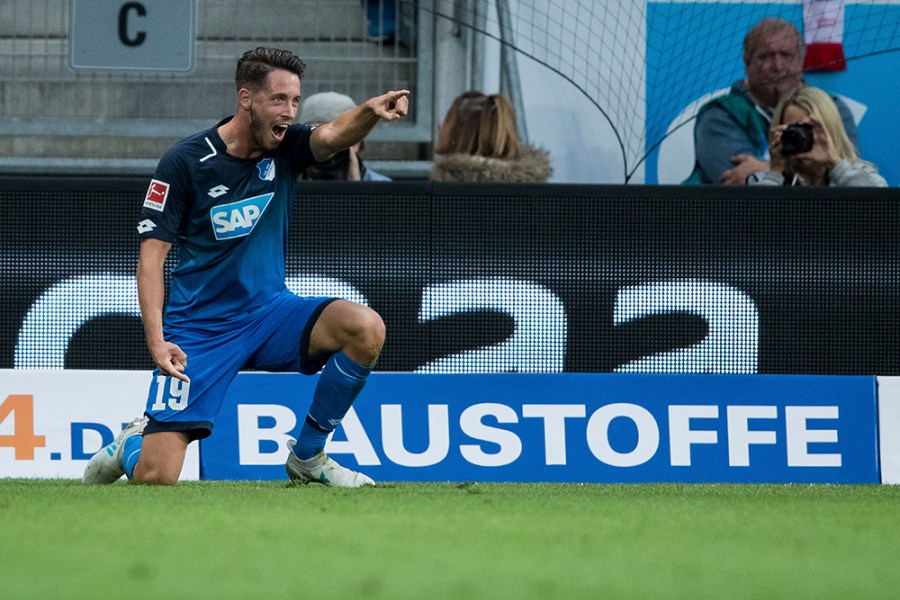 Striker Mark Uth, the scorer of both goals as Hoffenheim recorded a fine 2-0 home win over defending champions Bayern Munich, was hoping to quit the ‘Kraichgauer’ not so long ago.
Frustrated with his supersub role at the Rhein-Neckar-Arena last season and his status as one of the worst-paid players at the club, the 26-year-old Uth had set his heart on a return to hometown outfit Cologne, where he used to line up for the juniors and reserves.
With only a year left on his current contract, a six million euro deal to take him back to the Rhineland was rumoured to be taking shape, only for the Hoffenheim management to eventually pull the plug. Coach Julian Nagelsmann, keen to have as many attacking alternatives as possible, insisted he stay, even at the risk of him leaving for free next July.
After having his dream move denied, Uth might well have sulked or moaned. But instead opted to knuckle down and seems to have to turned a corner of late, regularly starting and scoring in the Bundesliga and coming off the bench to notch a couple of goals in the Champions League play-off loss to Liverpool.
Uth, bought from Dutch side Heerenveen in 2015 for a mere 2.2 million euros, always has been a sharp operator in the box. In the 2014-15 campaign he netted 15 goals in the Eredivisie and though only used sparingly by Hoffenheim last term (restricted to 11 Bundesliga starts or 1152 minutes of action), still racked up seven strikes. A goal every 165 minutes.
The left-footer certainly has a growing fan club at Hoffenheim. Team-mate and German international midfielder Kerem Demirbay describes him as “a striker who can make goals out of nothing”. Julian Nagelesmann speaks in reverential tones of his “extremely clinical finishing. “
Successfully setting a trap for Bayern to fall into is becoming a habit for Nagelsmann. Last season, he and his charges took four points off the Bavarians and in this latest giantkilling act, once again demonstrated his uncanny ability to outcoach his opposite number.
While Bayern had the lion’s share of possession (72 per cent), they had neither the space or the time to do much with it and that’s exactly what Nagelsmann intended – harrassing and stifling Carlo Ancelotti’s side, then landing the sucker punch.
Not all of Hoffenheim’s heroes against Bayern were listed on the team-sheet. A young ball-boy also played his part, his speedy recycling work enabling the quickly-taken throw-in which led to the home side’s opening goal on 27 minutes. Bayern’s protests were in vain. They had been caught sleeping on the job.
“We make a point of educating our ball-boys to get the ball back into play quickly,” smiled Nagelsmann.
What We Learned This Week
1. The Division Bell sounds at the Allianz-Arena.
Bayern chairman Karl-Heinz Rummenigge has hit out at star striker Robert Lewandowski for openly casting doubt on the club’s willingness to spend big in the transfer market. “Clearly Robert has been irritated by the recent Paris signings,” declared Rummenigge to Bild. “He’s employed by us as a footballer and for that earns an awful lot of money. If someone goes public with criticism of the coach, the club or his teamates, he’s going to run into trouble with me.”
2. O Captain. My Captain
Wolfsburg skipper and centre-forward Mario Gomez is likely to be out for a substantial period after severely damaging ligaments in his left-ankle. The Wolves top scorer last term with 16 goals, Gomez is sure to be badly missed. Another captain in the wars was Dortmund left-back Marcel Schmelzer, who only recently returned to the fray after two months on the sidelines with a right-ankle problem and now has re-injured it. Schmelzer was the victim of a late-tackle from Freiburg’s Yoric Ravet, a rash challenge for which he saw red.