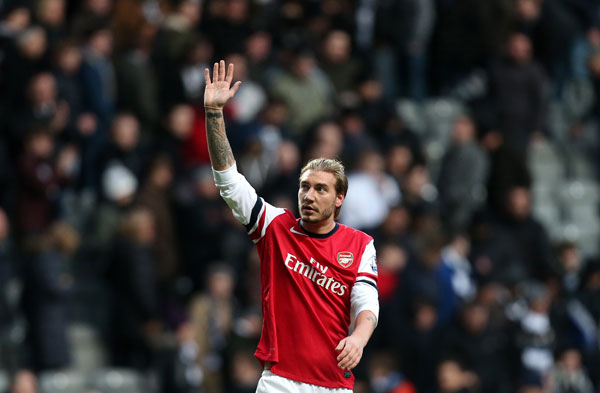 Arsenal striker Nicklas Bendtner is at the centre of a bizarre incident in which he is accused of pulling his trousers down, rubbing himself against a taxi and verbally abusing the driver.

An unnamed taxi driver told Danish newspaper BT that Bendtner started rubbing himself against the car window, while shouting “I will f*** you” and whipping the car with his belt.

The driver picked up the passengers at a Copenhagen restaurant where they had been watching Arsenal’s Champions League tie against Bayern Munich on Tuesday night.

Bendtner was in his hometown after not being selected for Arsenal’s trip to Germany. He was supposed to be injured, but dragged himself out for a night of partying with his friends.

It’s refreshing to see a young, dedicated footballer, who’s had his fair share of setbacks in recent years, buckling down and doing his utmost to regain his place at the top of his profession. And Bendtner, as we know, has been the model professional since he fell out of favour at Arsenal.

According to the driver, the group took a CD holder belonging to him and when he asked for it back, Bendtner threatened to “smash” the taxi driver before allegedly calling him “a fat little pig.”

After he threatened to call the police, Bendtner, began to behave quite strangely.

“I locked the doors and windows, but Bendtner was out by the side window and began to unbutton his pants,” said the taxi driver. “He also took out his belt and began to whip the car while he rubbed his abdomen against the window and yelled that he will f*** me.

“I have encountered drunks and alcoholics in Copenhagen for over 25 years, but I’ve never experienced anything like that.”

The driver phoned both his taxi company and the police after the incident.

The taxi company confirmed they received a phone call from the driver but said they would not take the matter further “because it wasn’t essentially an assault, but rather it was just a passenger who behaved like an idiot.”

Definitely not Bendtner then.