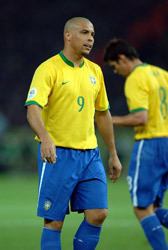 Milan have confirmed that they have no idea when striker Ronaldo will be fit to play again.

The Brazilian suffered a hamstring injury at the end of last season and then compounded the problem during celebrations with the club’s supporters at the end of July.

Milan chief officer Adriano Galliani said: “He is still feeling a little pain and until we are sure he is 100 per cent fit he won’t play.

“It’s a medical problem, I can’t say when he will come back.”

Meanwhile, Ronaldo’s compatriot Alexandre Pato has been cleared to join his new team-mates for training after celebrating his 18th birthday on Sunday.

The teenager, signed for £10million from Internacional this summer, is set to make his debut for the club in Thursday’s friendly against Dynamo Kyiv but will not be able to feature in a competitive match until January.

Pato told Milan Channel: “I know Ronaldo and Kaka are waiting for me. I am happy to be in Italy and I will work to honour this jersey.

“I know that Milan drew with Fiorentina on Monday and I saw some of the game on television. I hope to be in the stands to watch the next one.”

Ancelotti added: “When Pato arrives we must coddle him a little bit. This is why we do not have time to think about signing any other strikers.”