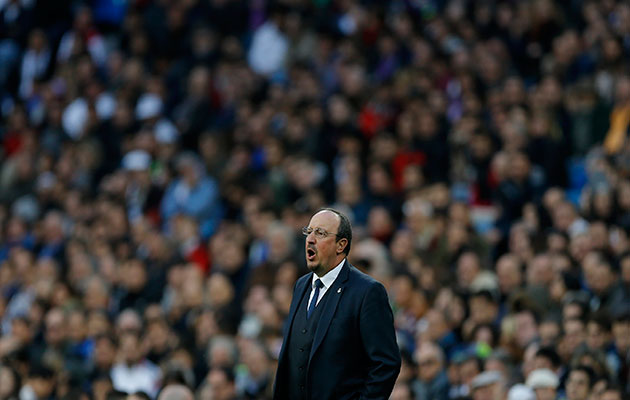 Rafael Benítez has thanked Real Madrid for giving him the opportunity to manage the club and and wished his successor, Zinedine Zidane, well.

The 55-year-old was sacked on Monday and replaced by Zidane after a disappointing seven-month spell as manager.

Writing on his personal website, rafabenitez.com, he said: “I would like to wish good luck to Zinedine Zidane, my successor, and his staff. To all the players, coaches and staff in both Valdebebas and Bernabéu, I wish all the best and also good luck.”

Benítez replaced Carlo Ancelotti in June, signing a three-year contact with his home-town club. But a series of indifferent performances culminating in the 4-0 home defeat by Barcelona in November, prompted speculation about his future. Moreover, the style of play under his stewardship, notwithstanding Real being La Liga’s highest goalscorers, brought criticism from the club’s supporters and the Madrid-based media. Less than seven months after taking over, the former Valencia, Liverpool, Chelsea and Napoli coach was on his way.

Benítez’s final match in charge was Sunday’s 2-2 draw at Valencia, a result which left Madrid in third spot in the Primera Division table, four points adrift of the leaders Atlético Madrid and two behind rivals Barcelona, who have played a game less.

Within 24 hours Benitez has left, to be replaced by Zidane, but he expressed no bitterness in his farewell statement.

“Now, at the end of my time as first team coach of Real Madrid, I would like to use this article to say goodbye to everyone at every level of the club,” he wrote. “I want everyone at the club from the Board of directors, executives, workers and all of the fans, know that it has been an honour and privilege to be in charge at this club where I grew up as a person, player and coach from the lowest categories through to the first team.

“As a Madridista from Madrid, steeped in the traditions and values of this institution, which I learned in the old sports city of Castellana, it has been an honour to work for these colours. I would especially like to thank everyone at the new sports city and the Santiago Bernabéu who since my first steps through the door have supported me and made my work easier. Thanks to all for helping.

“With all that I have said still in mind, I would like to wish good luck to Zinedine Zidane, my successor, and his staff. To all the players, coaches and staff in both Valdebebas and Bernabéu, I wish all the best and also good luck. With all my respect and thanks… HALA MADRID and NOTHING ELSE.”