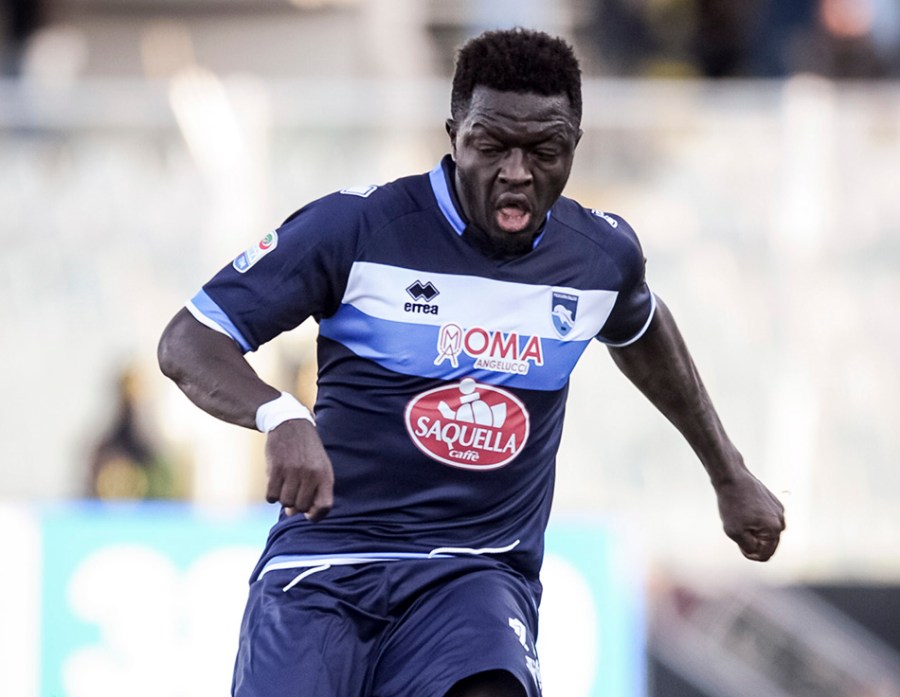 Last weekend in Italy arguably it all happened – Lazio beat Roma 3-1 in their derby clash to practically hand the Serie A title to Juventus; Napoli beat Inter at the San Siro to close the gap between themselves and second-placed Roma to just one point; and Atalanta crowned a splendid season by holding champions elect Juventus to a deserved 2-2 draw.
We would have preferred to start with some of these games, most of all the ever fascinating Rome derby in which Lazio coach Simone Inzaghi and his Senegalese striker Keita Bladé proved that they are both genuine class articles. Conscience, however, insists that we start with the absurd scenes witnessed in Cagliari where Pescara’s experienced Ghanaian Sully Muntari, faced with continuing racist abuse, simply walked off the pitch, picking up two yellow cards for his actions
The 32-year-old Muntari, a former Milan, Inter, Udinese, Portsmouth and Sunderland player as well as an 84 times capped Ghanaian international, decided on that enough (racial abuse) was enough. At the end of the first half, fed up with the constant stream of “monkey noise” style abuse aimed at him, Muntari walked over to a family of Cagliari fans. Muntari gave his team shirt to a child who was with his mother and father, asking the child to stop his animal noises and telling him that to insult a black footballer in that manner was “really horrible”.
Inevitably, Muntari’s move did not have the desired effect. Rather than quell the racist abuse, his gesture only increased it. When towards the end of the game, he was once again the object of abuse, Muntari turned to referee Daniele Minelli, calling on him to suspend the game.
For his pains, Muntari was given a yellow card for having talked to the spectators during a game. Annoyed with the referee, Muntari then turned his attention to the fourth man on the touchline. When he got no satisfaction there, Muntari simply walked off the pitch, in the process earning himself a second yellow card and a technical sending-off.
After the game he explained: “When they started to shout at me from the terraces in the second half, I shouted “bravi, bravi” at them.  The referee told me not to be addressing the spectators and that made me really mad.
“The referee is there to do everything, not just to blow his whistle on the pitch, but also to have the courage to suspend the game. I didn’t touch him [the referee] because there are certain rules but otherwise I would have buried him. If you don’t suspend games like this, this sort of thing will continue to happen.”
Various players and Cagliari officials claimed that they had heard no racist offence while Cagliari vice-president Stefano Filucchi told reporters: “We didn’t hear any racist chants and we are convinced that the Cagliari fans are not racist. We weren’t informed of anything like this.”
That could all be true. What seems sure though is that another ugly, racist page has been written into the annals of Italian football in the wake of incidents such as those involving Serb Sinisa Mihajlovic and Frenchman Patrick Vieira in a Lazio v Arsenal Champions League game in 2000,  Ivorian Maro Zoro at Messina in 2005 and that of another “walk-off”, this time from Milan’s Ghanaian Kevin Prince Boateng in a 2013 friendly against Pro-Patria.
Racism in Italian football is often the expression of an intolerant and ugly minority. However, sometimes you do wonder what examples fans are expected to follow. Remember that the current President of the Italian football federation, Carlo Tavecchio, raised more than a few eyebrows three years ago when, during his FIGC election campaign, he outlined the need for stricter controls on non-EU players being bought into Italian football, saying:
“England checks out players when they arrive in the country, to see if they are professional enough to play. With us, however, “Opti Poba”, who yesterday was eating bananas, today is first choice at Lazio.”
Fans, politicians and commentators all stigmatised him as a racist, calling on him to withdraw his FIGC candidacy: “Not a mistake. Just racism. Just ignorance.  Just vulgarity. He cannot be President of anything. Clear off, Tavecchio”, tweeted Nicola Fratoianni, a senior figure in hardline, left wing party SEL.
Of course, the moral of that tale is that Tavecchio went on to win his election and is still in charge of Italian football as we write. In the meantime, Muntari will doubtless be punished for leaving the field without the referee’s permission.  The road ahead, she is always rising against us.