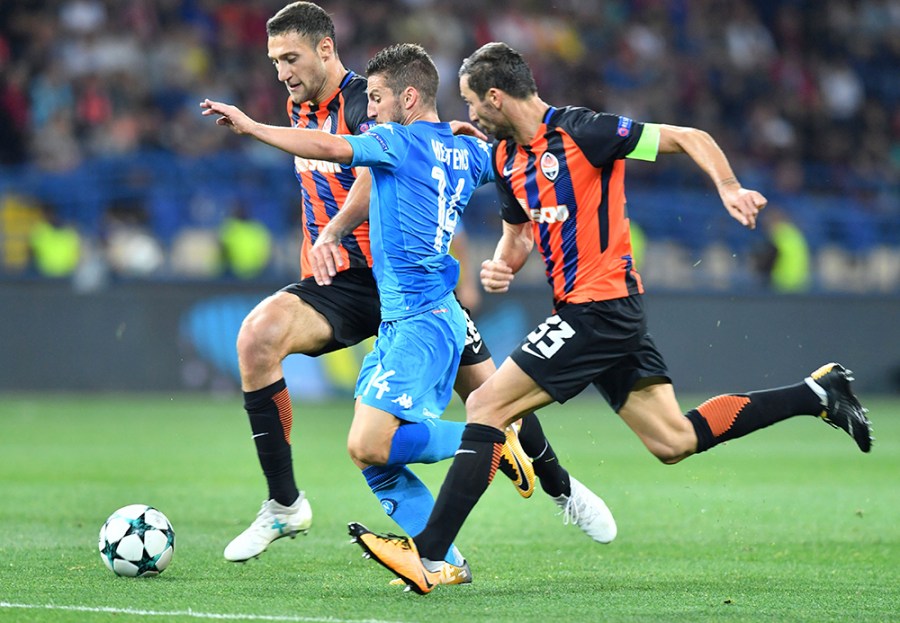 Not surprisingly, two splendid hat-ricks, respectively from Juve’s Argentinian Paulo Dybala and from Napoli’s Belgian Dries Maertens, dominated the Monday morning headlines in Italy. Yet, the results and the devastating form shown by both players prompts a legitimate question about an alleged gulf between Serie A and the Champions League.
The point here is that Italy’s three Champions League representatives, Juventus, Napoli and Roma, between them collected just one point from their opening Champions League games last week. Experiencing a second-half collapse similar to that in the Champions League Final in Cardiff last May, Juventus went down 3-0 away to Barcelona. Napoli did marginally better, going down 3-2 away to Shaktar Donetsk whilst Roma picked up the single Italian point with an undeserved 0-0 home draw against Atletico Madrid.
Those disappointing results were immediately countered by three Italian wins in the Europa League last Thursday, with Milan thrashing Austria Vienna 5-1 in  Vienna, Lazio winning 3-2 away to Dutch side Vitesse and little Atalanta winning 3-0 at “home” (in Reggo Emilio) to Everton.  So before we conclude that the opening  Champions League salvo confirms yet another step in the Decline and Fall of Italian football, perhaps we should pause for a second.
Take Juventus, for example. For 45 minutes against Barca, they gave as good, if not better, than they got. A shade unlucky to concede a brilliantly worked goal from wizard Messi just before half time, Juventus failed to reproduce their excellent first half form as they completely faded out in a second-half collapse that looked more psychological than physical.
Despite the final result, it might just be a little premature to conclude that Juventus are still suffering from the Cardiff blues. Faced with the inspiration of Lionel Messi and Andrés Iniesta, both on a good night, most teams would be in difficulty. However, the fact that Juve could bounce back from that defeat with an immediate 3-0 away win against Sassuolo does underline the obvious gulf in competitive quality between some Serie A and some Champions League teams.
That gulf was further underlined by both Napoli’s 6-0 thrashing of hapless Benevento and by Roma’s 3-0 defeat of Verona. Here, too, however, there are mitigating considerations to be offered re the relatively disappointing form of both sides in the Champions. For a start, Napoli coach Maurizio Sarri opted to rest his most in-form striker, Maertens, for the Shaktar tie, bringing him on only when the side was already 2-0 down. Not for nothing, Napoli immediately looked a better side, scoring one and coming close to an equaliser.
If Napoli still seem to lack Champions League “personality”, especially away from home (see their second round tie away to Real Madrid last February), that could yet be a problem they leave behind them, if and when they progress in this year’s tournament. As for Roma, they are still very much a “work-in-progress” under new coach, Eusebio Di Francesco. Already beaten once in Serie A (by Inter), Roma look some long way behind both Juventus and Napoli.
As for the Europa League results, they underline some fundamental realities that have already asserted themselves in this new Serie A season. For a start, Lazio began well by defeating Juventus 3-2 in the Supercoppa last month and they have continued on from there, defeating Milan 4-1 along the way to put themselves into fourth place.    Their defeat of Vitesse, twice coming from behind to win, is yet further proof that their young coach, Simone Inzaghi, seems destined for a glittering managerial career.
As for Atalanta, they continue to surprise. World Soccer gave Gian Piero Gasperini the “Best Coach” of the Italian season title last year after he guided the club to a fourth place finish and a return to European competition for the first time in 26 years.
Yet, we might have to give the title to him again since he appears to be continuing on from where he left off. Even though in the last year he has lost talent such as Roberto Gagliardini (Inter), Ivorian Franck Kessie and Andre Conti (both Milan) and even though midfielder Leonardo Spinazzola has not yet played this season, Atalanta continue to motor, as witness their Europa League win against Everton.
Milan’s 5-1 defeat of Austria Vienna may say more about the Austrian side’s weaknesses than about Milan’s strengths but it does remind us that the city of Milano is getting ready to retake its habitual place at the top table of Italian football. Even if coach Vincenzo Montella still has some way to go with Milan, city rivals Inter have made a surprisingly good seasonal start with four straight wins to go joint top of the table with Juventus and Napoli.
Inevitably, the Milano media hype has already swung into action, speculating on an impending Inter title challenge.  In reality, Inter were far from all-dominant in their last two wins, against minnows Spal and Crotone. On Sunday, for example, Inter huffed and puffed but were still on 0-0 until Slovak defender Milan Skriniar scrambled home a fortuitous 82nd minute goal. Inter went on to beat Crotone 2-0 but, as of now, they look far from the finished article, with coach Luciano Spalletti still having much work to do.
We have said it before but it is worth repeating. For the time being, Juventus and Napoli seem to be some way ahead of the rest in Serie A, as the odds at bestbettingsitesuk.co.uk suggest. We would also suggest that they are not as far off the pace in the Champions League as last week’s results would suggest.