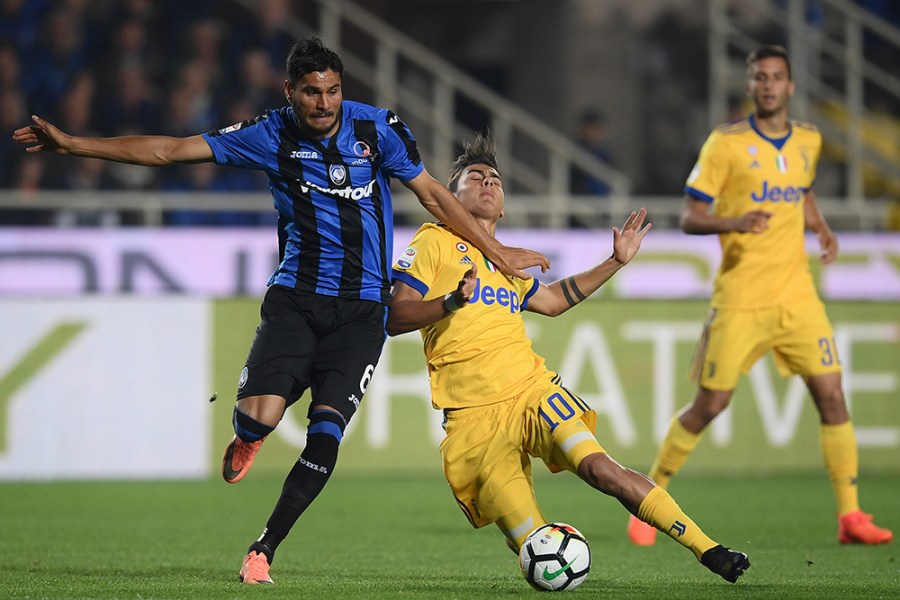 On the weekend when Napoli went top of Serie A at the beginning of a likely, season-long tussle with old rivals Juventus, perhaps the side that deserved the headlines most was little Atalanta. A dramatic, hard fought 2-2 draw with champions Juve on Sunday night proved yet again that the current edition of Atalanta is a serious number indeed.
The side from Bergamo, just up the road from Milan, has long been known as one of the most potent “nurseries” in Italian football.  Their traditional ability to churn out talent is highlighted by the fact that four of the current Atalanta generation, namely Roberto Gagliardini (now Inter), Andrea Petagna, Leonardo Spinnazola and Andrea Conti (now Milan) have all been capped in the last year by Italian national team coach, Gian Piero Ventura. Indeed, Spinnazola is in Italy’s squad for the upcoming World Cup qualifiers against Macedonia and Albania.
Italian fans and critics saw for themselves last season just what a competitive team this is as coach Gian Piero Gasparini guided them to their best ever Serie A finish, in fourth place. A 3-0 Europa League home win against Everton followed by a 1-1 away draw with Lyon last Thursday suggested that very shortly fans all over Europe are going to become familiar with Atalanta.
The intense efforts of that 1-1 draw with Lyon had suggested to some that Atalanta would go into their home game with Juventus at a significant disadvantage. After all, they had one day less of rest than their illustrious rivals who picked up their first European points of the season when defeating Greek side Olympiakos 2-0 in their Champions League tie in Turin on Wednesday night.
That, too, is exactly how it looked as an immensely confident Juventus cruised to 2-0 after just 24 dominant minutes, thanks to goals from Federico Bernardeschi and Argentine Gonzalo Higuain. At that stage, one wondered if the Bergamo team were going to be on the wrong end of a drubbing.
Not so. There is no greater jewel in the Atalanta crown than their pocket-sized Argentine schemer, “Papu” Gomez. Against Lyon, he scored that all-vital second half equaliser with a peach of a free kick. On Sunday night, he did it again, setting up both Atlanta goals in an improbable comeback.
First, he induced Gigi Buffon into an error with a clever, well struck free kick which the Italy and Juventus captain failed to hold. His parried save went straight to the feet of onrushing Atalanta defender Mattia Caldara who slotted home a 31st minute goal that surprisingly put Atalanta back in the game. Incidentally, the same Caldara has already been bought by Juventus and will most probably be moving to Turin next summer.
Having gone from total demoralisation to re-found self-belief, Atalanta then made a fight of it with Juventus. Gomez again saved the day halfway through the second half when he hit a fiercely struck cross right into the path of team mate Bryan Cristante for an unstoppable 67th minute equaliser.
So then, Atalanta were good value for their home draw? Yes, they were but do not go telling that to Juventus coach, Massimiliano Allegri. As he stomped off the pitch at the Stadio Atleti Azzurri, doing a reasonable imitation of an enraged, Wizard of Oz style scarecrow, it seemed very clear that Allegri was less than happy.
He had his reasons. Namely, that modern invention called the VAR, the Video Assistant Referee for those of you who have yet to familiarise yourselves with this marvellous gadget. Ten minutes before Cristante’s equaliser for 2-2, Juventus thought that they had won the game when Mario Mandzukic headed home to put the Old Lady 3-1 up, after a cross from Paulo Dybala.
The VAR referee, however, called a halt to the goal celebrations when he alerted match referee, Antonio Damato, to the fact that in the build-up to the goal, Juventus right back Stefan Lichtsteiner had elbowed Papu Gomez in the mouth, in process flattening the little man. After some hectic moments of protest, the referee correctly over-ruled the goal, giving Lichtsteiner a yellow card instead.
After the match, Allegri explained his disappointment with the ruling, introducing the new concept of “objective” and “subjective” controversial incidents, saying:
“…All I say is that if we want to make football into a non-sport, then we should continue to use the VAR in subjective situations.  That way when we get (vital games) next spring, the match will last four hours, just like in American football…
“As far as I am concerned, the VAR should be used only for objective situations, as for all the rest, the match referee should decide…”
Allegri’s annoyance was understandable. This was a game Juventus should and could have won. All the more so, given that Dybala missed a late penalty that would have sealed the three points. Incidentally, this time the referee again consulted the VAR but only to confirm his original decision, proving that  the VAR does not always work against Juventus.
In the end, the night and probably the weekend belonged to Atalanta. Napoli, after a 3-0 home win against Cagliari, might be back on top, Inter might have appeared lucky again in a 2-1 win against hapless Benevento and Roma clearly pulled off an important win when defeating Milan 2-0 at the San Siro. For all that, though, the Bergamo team take all the headline honours for being the first side to take Serie A points off Juventus this season. Between now and next May, not many others will be able to do that.