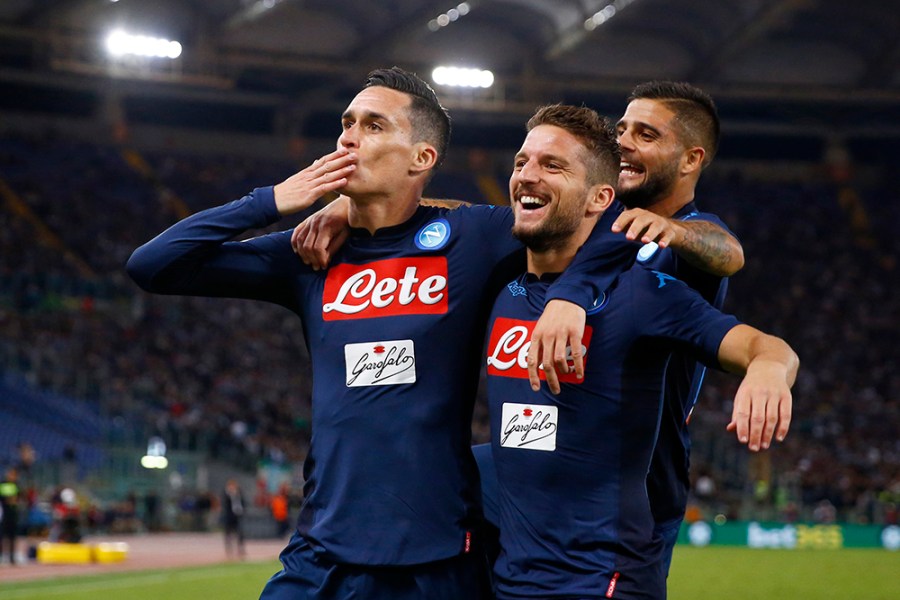 League leaders Napoli line out against champions Juventus at a full-house San Paolo on Friday night for one of those eagerly awaited games that, by next May, might well prove to have been decisive. Napoli come into the game four points ahead of third placed Juventus, meaning that a home win would leave them seven points clear of the Old Lady, a lead which until recently would have seemed unthinkable.
Even if Internazionale, two points behind Napoli in second place, will clearly still have a major say in the title contest, this particular clash could yet represent a watershed moment in the season, the night when the consideration that the Old Lady might be about to surrender her crown becomes a reality. Likewise, were Juventus to pick up either an away draw or, more impressively, an away win, then it would support the opinion of many of us (including your correspondent) who regularly warn against writing off the Old Lady too fast.
Either way, this is a big one and it is hard not to agree with sports daily La Gazzetta Dello Sport which this week called the contest, “The Best There Is”, (in Italy at least).   The point is that in a country where the nerves are still raw in the wake of that catastrophic World Cup elimination, Italian football could badly do not only with an entertaining, convincing spectacle at the San Paolo but also from some even more convincing football from both teams when they return to Champions League action next week.
Napoli, Juventus and Roma all go into next week’s last day of the Group stage, with work still to be done if they are to make it to the second round. Napoli, to be fair, already  look out of it, given that an away win against Feyenoord will prove meaningless if Ukraine side Shakhtar Donetsk manage even a home draw against English Premiership leaders, Manchester City.
Juventus, in contrast, look to be in a very strong position in second place in their group, three points behind Barcelona. They, at least, can control their own fate, with an away win against bottom team Olympiakos. That, mind you, would only be necessary in the unlikely event that Sporting pick up an away win at the Camp Nou.  Roma, by the way, are through along with already qualified Chelsea, just as long as they win at home to Azerbaijan side Qarabag.
All of which is to say, that this Napoli v Juventus clash, in recent years one of the “decisive” games of the season, comes at a very delicate moment when both sides will have have other things on their minds. When the two clubs met in the corresponding tie last season, in Turin in October 2016, the pre-match hype was dominated not so much by Champions League considerations as by the name of one player, namely ex-Napoli, present-Juventus striker Argentine, Gonzalo Higuain.
Napoli’s once most loved son truly rubbed salt into the wounds caused by his €94 million euro move to Juventus last summer by scoring a brilliant winning goal in the 70th minute of that game, to wrap up a 2-1 win.  This week, Higuain has again dominated the pre-match talk. This week, the Napoli fans learned to their disappointment that they may be denied the chance to boo and jeer their hero turned traitor because he could be ruled out by injury.
Higuain broke a finger (the third metacarpal) in his left hand in a freak training ground incident last weekend when midfielder Claudio Marchesi trod on him.  The injury was severe enough to require surgery last Monday, making it seem unlikely that he will line out on Friday night. However, coach Massimiliano Allegri did not rule him out of the game at his Thursday pre-match news conference, saying: “He may play…depends on how much pain he is feeling. Obviously, it makes no sense to risk him for just one game when we still have another 30 to play.”
Allegri’s acknowledgement that the season still has a long way to go was an obvious reminder that, just at the moment, this game is not his major priority.  Yes, indeed that Champions League trophy, is foremost in his thoughts: “For us, the game at the San Paolo will be a good preparation for our game against Olympiakos, a decisive game for us because it can put us into the second round.”
In reality, Higuain seems destined for the bench, albeit with his hand heavily bandaged and ready to play, in case Allegri opts to call on him as a last resort.   In the probable absence of Higuain, Allegri looks to his experienced Croatian striker Mario Mandzukic to lead a one man attack, probably supported by Argentine Paulo Dybala and Brazilian Douglas Costa.
Down at the other end, Napoli will rely on their Three Musketeers, Belgian Dries Mertens flanked by Spaniard Josè Callejon and man of the moment, Lorenzo Insigne.  Even if both Callejon and Mertens have begun to look just a little jaded in the wake of Napoli’s lightning autumn campaign, the good news is that Insigne continues to play out of his skin. This, of course, is something that 59 million Italians (NOT including ex-Italy coach Gianpiero Ventura) had long since noticed.
This could be an Italian classic in as much as we are dealing with two talented, organised sides, with one more offensive (Napoli) and one more defensive (Juventus). We could be in for a good night at the San Paolo.