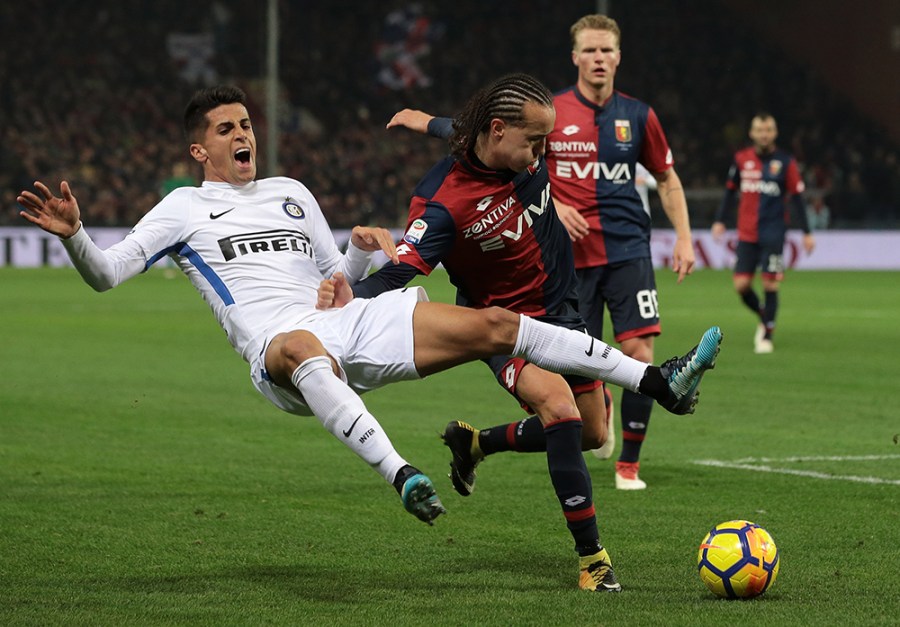 Arguably, the most remarkable result of this last Italian weekend came in Genoa where Davide Ballardini’s Genoa side beat one time league leaders Inter 2-0.     There is nothing strange about Italy’s oldest football team (founded in 1893) defeating one of the Serie A powerhouses.

In their home town, Genoa are rarely a pushover. The point is, though, that this latest setback continues a miserable Inter run which, curiously, began two months ago when the club was flying high on top of Serie A.  On December 10, then league leaders Inter travelled to Turin for a top of the table clash with the Old Lady herself, namely reigning champions, Juventus.

That game seemed to go well for Inter as they did well to hold Juve to a 0-0 draw at the Allianz Stadium, starting better than Juve in a very tight match but then gradually having to give ground to the champions who came close to winning the game when Croat Mario Mandzukic heat the crossbar. Still that was a very good result.

And yet since then, Inter have picked up just eight points in their last nine games.  Not only have they long since been knocked off the top of the table but, following Laizo’s 2-0 win over Verona on Monday night, they are no longer in the Champions League zone. Currently in 5th place, Inter along the recent way have managed some pretty unimpressive results, drawing with such as Spal and Crotone not to mention defeats by Sassuolo and, on Saturday, by Genoa.

Last autumn, after a hesitant start, Inter looked like they might be about to get it together with talented new coach Luciano Spalletti seemingly on the verge of immediately crafting a competitive, winning team. After two months of disappointments, however, the Inter faithful are bitterly deluded, worried that this seasonal decline and fall is unstoppable:

“Inter has been abandoned to its own fate. The owner lives on the other side of the world. His son lives here all right and he is a nice fellow who goes round in a big car that costs more than half the entire Benevento defence but he gives the impression of not really understanding what is happening on the pitch,” lamented TV news presenter and Inter fan, Enrico Mentana, to Sky Italia last weekend.

Mentana’s analysis is more that of a diehard Inter fan than of an objective football critic. However, with the always important Milan derby just two weeks away, it is time Inter got their show back on the road.  Spalletti and his players will hope that the fixture calendar has given them a hand since they are at home to bottom side Benevento next Saturday night.

The only fly in thar particular ointment is the consideration that Benevento, while still a long way last, looked lively enough in a spirited 3-2 win against relegation rivals Crotone on Sunday. Nothing can be taken for granted…

While one Milan side continues to lose ground, the other one, AC Milan, continues its dogged climb back up the table. At one stage last October under Vincenzo Montella, Milan were in the bottom half of the table, in an improbable 11th place.   Since Gennaro Gattuso was appointed in late November, the club has crawled back up the table with Sunday’s night’s 1-0 win over Sampdoria taking them into the Europa League zone in seventh on 41 points along with sixth placed Sampdoria.

Furthermore, following a 3-0 away win in the Europa League against Bulgarian side Ludogorets last week, Milan look to be well on the road to going through to the next round. Which is rather more than you can say for league leaders Napoli who, on the evidence of their 3-1 Europa League home loss to Leipzig, would seem to have put all their eggs in the Serie A title basket.

For example, coach Sarri started this game without Lorenzo Insigne, Belgian striker Dris Mertens and Brazilian midfielders, Allen and Jorghino, resting them all for future Serie A battles. Given that on Sunday, with all four in the starting line-up, Napoli beat Spal 1-0 to maintain their one point lead over Juventus at the top, Sarri has perhaps made his point. If and when Napoli go out of the Europa League, the Napoli environment will not be crying.  After all, the “scudetto” is what matters.

And what about the Old Lady herself? After the disappointment of that 2-2 Champions League home draw with Tottenham, they licked their wounds and got back down to business beating Torino 1-0 in a city derby that, for once, was a little less “Sturm und Drang” than usual.