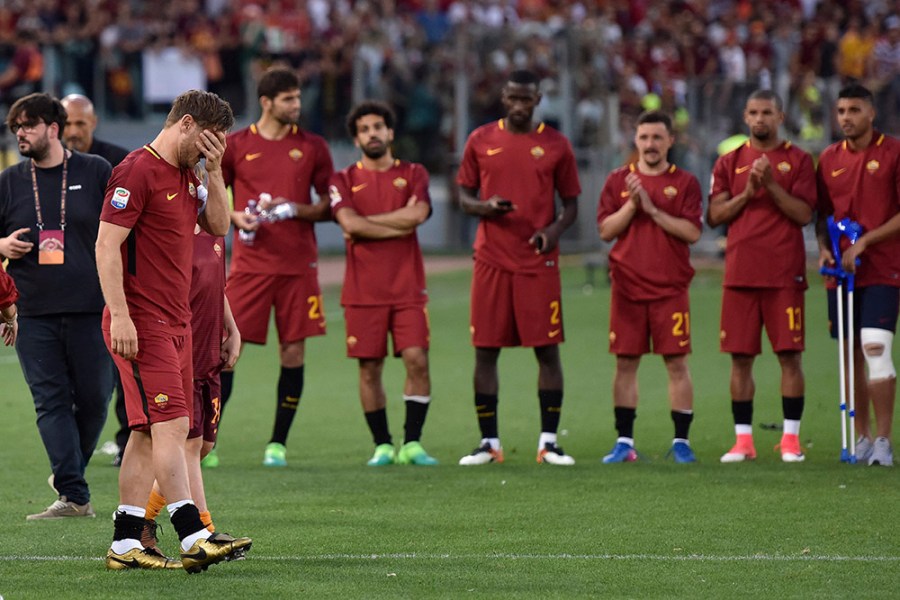 In 40 years of writing about football, your correspondent has never seen anything quite like the tsunami of gratitude, recognition, affection, admiration and love that the Olympic Stadium rained down on Francesco Totti on Sunday night. On the last day of the season, Sunday’s AS Roma v Genoa was an important match because it would decide whether Rome would finish second or third behind Juventus in Serie A.

Yet, that vital consideration was almost lost in the frenzy of a collective Totti love-fest that had been generated by the announcement earlier this month that this would be the player’s last game for Roma. (Ironically, it remains to be seen if it is his definitive last competitive game since Totti has had “Indian Summer” offers from various parts of the world including the USA.)

Whether or not, the curtain has definitively come down on his career – and for what it is worth, we would argue that this was indeed THE END –  no one who witnessed Sunday night’s remarkable scenes can have any doubt about the Roma fans’ feelings about “er capitano”. Some 65,000 fans packed into a sold-out Olimpico, creating a nowadays rare atmosphere that, in times of austerity and fan protest, seemed to belong to yesteryear. The 65,000 were there to say farewell after a game in which the 40-year-old Totti came on as a (largely non-influential) 54th minute substitute in a 3-2 win against Genoa.

Francesco Totti may not be the greatest Italian footballer of all time, even if he has to come close to that mythical epithet. There may well have been better playmakers and goalscorers down the years, even if Totti was more than useful in both departments. What needs must be said, however, is that never has a football icon been the object of such unconditional love and admiration as that directed at Totti by Roma (and other) fans.

To some extent, of course, this is due to Totti’s longevity as a player. After all, he joined Roma as a blossoming  “enfant terrible” at the age of 12 in 1989,  the year that marked the fall of the Berlin Wall. He joined Roma at the age of 12 and he stayed there all his athletic life, right down to Sunday night.

If there was one thing that the Roma fans appreciated in Totti, it was (and is) his total, fierce loyalty to the Roma cause. More than all his wonderful through balls, his pyrotechnic goals, his uncanny overall vision, the Roma fans have always felt deeply grateful to the fact he remained faithful to Roma notwithstanding the siren calls from clubs such as Real Madrid (in 2002)

Winner of the 2006 World Cup with Italy and the 2001 scudetto with Roma, Totti in all played 786 times for Roma and 58 times for Italy, scoring 307 goals for his club and nine goals for his country.  One banner at the Olimpico summed up the fans’ feelings – “Totti E La Roma” (Totti is Roma).

The thing about Totti is that it seems that he has always been there, turning it on for his team.    The sense of loss and the warm feelings prompted by his retirement are, partly at least, linked to the fact two whole generations (if not three) have lived under the spell of Totti, marvelling at his football and adoring his fierce sense of “romanista” (the club) and “roman” (the city) pride.

When the game was finally and heartstoppingly over – Genoa went close to spoiling the party since it required a 91st minute goal from Roma’s Argentinian Diego Perotti to ensure victory and a consequent 2nd place Serie A finish – Totti set out on the lap of honour to end all laps of honour.   Accompanied by his wife, TV presenter Hilary Blasi, and their three children, Christian, Chanel and Isabel, Totti walked slowly around the still packed Olimpico, stopping regularly to bow to his public.

As he made his way round, he was accompanied by a tidal wave of emotion and good will not to mention a booming sound track which featured Roma team anthems and the Gladiator soundtrack. Ocassionally the visibly moved Totti would put his hands to his face and shake his head, stunned, it seemed, both by the fans lovefest and also perhaps by the realisation that this time, it really was the end.

When he got down to the Curva Sud, the heartland of the Rome hardcore support, he stopped to sign a football which he then dispatched summarily into the crowd with an almighty kick.

Finally, after he had finished his triumphal lap, Totti picked up a microphone to say his own farewell to the fans: “The time has come that I would have wished would never come. For days now, I have been reading wonderful things, and everytime I just break down and cry, I have been crying for days, like a madman.

“Right now, I am afraid and it is not the same fear that you have when it comes to taking a penalty.   This time I cannot look through the net to see what is coming next. This time, I am the one who needs you.  To be born roman and romanista is a privilege, to have been the captain of this club has been an honour.

“I won’t be able to thrill you anymore with my feet but my love will always be with you. Now I have to step off the stage but I would just love to be with you for another 25 years.  I love you.”

There are not many nights like this in football.