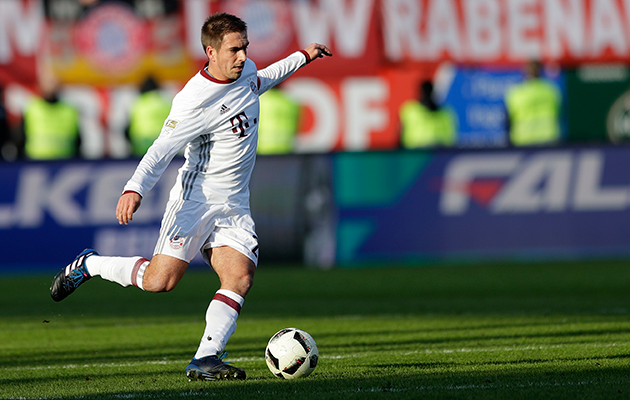 1. Lahm: singularly bowing out
Bayern Munich full-back and captain, Philipp Lahm, one of Germany’s all-time great defenders, is to retire at the end of the season.

Now 33, Lahm, has not shown any sign at all of declining powers and could have played on at the top level for two or three more years. But as he proved when calling time on his international career after skippering the Nationalmannschaft to triumph at World Cup 2014, he is very much his own unsentimental man.

Absolutely convinced that 15 seasons of top-flight brilliance – two with Stuttgart, 13 for Bayern – was more than enough. Lahm also made it clear that he would not, as many had expected, become Bayern’s director of sport.

The announcement has sparked controversy a plenty. Rather than Lahm’s unilateral adieu, Bayern would have preferred a joint statement and rumours have been circulating that star and club powerbrokers are not on the same page. It’s been suggested in the press that Lahm and Bayern had markedly different visions of the director of sport job and according to Kicker magazine, a number of figures on the club’s supervisory board were unsure about him going straight from pitch to front-office.

With Lahm no longer in the running for the ‘Sportdirektor‘ brief, the favourite for the post is Gladbach general manager, Max Eberl.

2. Dortmund dip
In England and Spain the claim is often made that the Bundesliga lacks the strength in depth of the Premier League or La Liga. So how to explain the starling events of the weekend, when mighty Dortmund slumped to an humiliating 2-1 defeat at Darmstadt, a bottom of the table team who had only garnered one point from their previous eleven fixtures.

Fired up by their ebullient coach, Torsten Frings, the not-so flowery Lilies were band of brothers on a mission. Undaunted and aggressive, they swarmed all over the Dortmunder at times and could indeed have scored more than the two goals put away by new American attacker Terence Boyd (signed in the winter break from RB Leipzig and young Croat striker, Antonio Colak.

For a team supposed to be one of Europe’s best, Dortmund, quite frankly were a disaster zone. Defensively an open door and inexplicably relying on kick and rush tactics. A world apart from their usual cultured approach work. Before the match, Dortmund coach, Thomas Tuchel, sounded an anti-complacency warning. Pity  no one was listening.

3. Crisis ? What crisis?
After sweeping all before them in the Autumn Championship, the young guns of RB Leipzig suddenly seem to be firing blanks. Saturday’s 3-0 loss at home to a reborn Hamburg, was the Red Bull’s second consecutive defeat and now seven points adrift of league leaders, Bayern, the bells are tolling on their fairy tale title bid.

The only consolation for the Saxons is that other results went their way at the weekend. Their four closest rivals for a Champions League qualifying spot (Eintracht Frankfurt, Dortmund, Hoffenheim and Hertha Berlin) all lost, thus minimising the damage.

“Collectively we failed today, but we’re only human,” declared RB coach, Ralph Hasenhuttl. “Sometimes you just simply underperform. In spite of everything, we shouldn’t be expecting too much from this team.”

In a moment of sweet  revenge, Hamburg’s first goal on Saturday was the work of a recent RB reject, Greek centre-back, Kyriakos Papadopoulos, comprehensively outjumping his marker to power in a header.

4. Fake news comes to the Bundesliga
Never one to turn the other cheek in response to a perceived slight, Leverkusen director of sport, Rudi Völler says he intends to boycott Sky TV Deutschland after the network inaccurately asserted that the Rhinelanders had decided to sack coach, Roger Schmidt.

Alternative facts, screamed Rudi. “To put out such an outrageous false report shortly before an important game (Leverkusen’s 3-0 home victory against Frankfurt on Saturday) is a total disgrace. If there’s no apology and Sky don’t reveal their source, then there’ll be no more interviews.”

Schmidt is under pressure nonetheless. Struggling with chronic inconsistency, his side is in real danger of not even making the Europa League cut and for a club of Leverkusen’s pedigree that’s simply unacceptable. A change of leadership could well be on the cards. But only when the final accounts are examined at the end of the season.

5. Lotte love
Shocks were few and far between in the DFB Cup Round of 16. But at least us romantics can savour the giantkilling feats of third tier Sportfreunde Lotte, who after eliminating top-flight Bremen and Leverkusen, duly completed a hat-trick of scalps last week, deservedly beating second division 1860 Munich 2-0.

A victory for tenacity, good organisation and no little skill and clever interplay. Just reward for all the Lotte fans who spent the day of the game clearing the pitch and surrounds of snow.

Making it match-fit, so to speak. In the quarter-finals, Lotte face another gargantuan challenge in the shape of Dortmund. The tie of the last-eight ?  Schalke’s trip to Bayern.