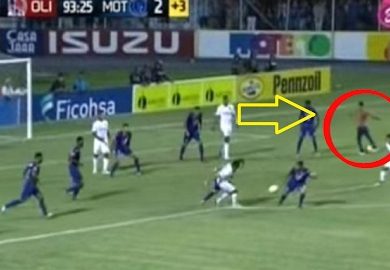 Olimpia pressed forward in numbers but on the other side of the penalty area, a topless pitch invader dribbled towards goal with another football.

Olimpia’s Rojas lashes in a shot at goal, hitting the back of the net, at the same time the pitch invader rolls his own ball past the helpless keeper.

Remarkably, despite the fact that the pitch invader was interfering with play and that there were two balls on the pitch, both of which ended up in the back of the Motagua net, the referee decided to allow the late equaliser to stand.