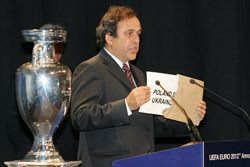 Portsmouth will be hoping to end a 50 year hoodoo as they travel to Old Trafford to play Man Utd tonight, a place they last won at in 1957. Click here for the latest match betting!

Poland and Ukraine have been told by UEFA president Michel Platini to speed up their preparations for the 2012 European championships.

Platini informed both countries that their preparations for the tournament must improve.

“I have the distinct feeling that the next four to six months will be crucial in order to avoid any critical slippage in sports and public infrastructure projects and to protect the global credibility of the Euro project itself,” Platini said during executive committee discussions of the planning stage.

UEFA acknowledged that preparations had suffered because of political instability in the two countries since they won the race to host the finals last April.

Platini demanded governments of the two countries to set up proper management structures in order to closely monitor “all the projects related to Euro 2012”.

Michal Listkiewicz, the president of the Polish FA said: “It is true that we are behind in some projects because of the political turbulence of last year but we are confident that everything will be back on schedule.”

In a statement, UEFA said “By choosing Poland and the Ukraine, UEFA took a momentous decision that gave a strong message to central and eastern Europe.

“It is clear that there has been a certain degree of political instability in both countries in 2007. However, this instability now seems to be over with newly established governments in each country, but there can be no doubt that the launch of investment-intensive projects, such as stadiums, airports and motorways has suffered from the instability.”

Platini added: “UEFA is totally committed to do everything possible in the next few months to assist and support the two associations at both the advisory and administrative level in order to guarantee the success of the project.”

World Cup holders Italy were strongly tipped to win last April’s vote and the decision to award the 2012 finals to the joint bid from eastern Europe came as a shock. However, despite the current uncertainty there was no suggestion from Platini that the finals would be taken away from Poland and Ukraine.

Portsmouth will be hoping to end a 50 year hoodoo as they travel to Old Trafford to play Man Utd tonight, a place they last won at in 1957. Click here for the latest match betting!