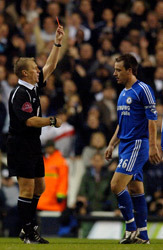 Referees’ chief Keith Hackett is to investigate Chelsea’s claims that referee Graham Poll said they “needed to be taught a lesson” at Spurs.

Newspaper reports claim Poll made the remarks and told Chelsea: “Your discipline is out of order”.

Hackett told Radio Five Live: “I have very serious doubts that one of our most experienced and world-class refs would make that kind of comment.

“It is disappointing. It puts doubt in the public’s mind about the integrity of one of my referees, but it will be investigated.”

“The player who has made the comments should be aware that the referee along with his assistant referees are all ‘miked’ up.

“My assessor can hear from before kick-off to the end what is being said. If anything untoward was said I will be able to discuss it with Graham’s colleagues on the day.

“Already having talked to one of his colleagues who was listening, it has been flatly denied.

“I have told Graham not to comment on this matter, because it may be investigated by the football authorities.”

Chelsea boss Jose Mourinho and his players expressed their frustration with Poll after the game.

“I’m not moaning, I’m really not, but we really shouldn’t lose a game like that.

“Once again we scored a goal that was fine. I’ve seen it on TV and once again the referee has robbed us again because if we had gone to 2-0 then the game would have been dead.

“When I was at Arsenal and we started to win things, the referees started to question our discipline and give us yellow cards. I have come to Chelsea and it’s exactly the same.

“It’s definitely to do with the team that’s winning most. Chelsea are not a dirty team. It’s crazy. We have to stick together, put this game behind us, look forward to the next one and win it.”