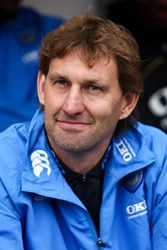 Portsmouth have confirmed that manager Tony Adams has left the Premier League club.

Adams, who was appointed to succeed Harry Redknapp just four months ago, was axed from his post after a run of nine games without a win which left the club a point above the relegation zone.

Director of youth operations Paul Hart will take over as caretaker manager until a permanent successor can be found.

“This has been a very difficult decision and Tony has worked tirelessly to arrest the slump in form,” a club spokesman told the club’s official website.

“He is rightfully highly-respected within the football world and played a major role in our FA Cup triumph last season. We would like to thank him and John and wish them well in the future.

“The owner and the board feel they have been as supportive as they can during a period where results have been poor. The team has played well but too many points have been dropped from winning positions.

“Notwithstanding the adverse economic conditions the board remains committed to the continued growth and development of the club for the future, building on its achievements of the last three years.

“The priority is for Portsmouth football club to remain in the top flight and we feel the appointment of a new manager will give us the best opportunity to enable us to do this.

“Paul Hart knows the football club, having joined us nearly two years ago, and is a respected coach with managerial experience.”

Adams has admitted that the club’s decision has taken him by surprise, as he felt that he wasn’t given enough time to build a squad.

“I am a little bit surprised but results haven’t been good,” the former Arsenal defender told BBC Radio Solent.

“I haven’t had a lot of time and I certainly haven’t had the financial backing. We’ve had a few injuries as well and that’s tough to take.

“It’s not turned me off management, that’s for sure.

“I’ve just got to make sure I get all the parameters right before I walk into the next one.

“I can’t wait to get back in and have another bash. But I won’t be impulsive, I’ve got to learn from that and make sure I get things right.”