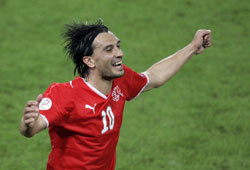 Switzerland finished their Euro 2008 campaign on a high with a 2-0 victory over Group A winners Portugal.

The co-hosts had no chance of progressing to the quarter-finals after being beaten by Czech Republic and Turkey in their opening two games, but they sent their fans home happy and provided a wonderful farewell present for departing coach Kobi Kuhn.

Luiz Felipe Scolari made eight changes to his line-up from the team that started Portugal’s first two matches, with only goalkeeper Ricardo and defenders Paulo Ferreira and Pepe retained.

Kuhn made two changes with retiring goalkeeper Pascal Zuberbuhler handed a farewell start in place of Diego Benaglio and Johan Vonlanthen coming in for Barnetta in midfield.

Portugal carved out more chances in the first half but veteran stopper Pascal Zuberbuhler tipped Pepe’s effort onto the woodwork, Nani had two penalty appeals turned down and Helder Postiga had a goal harshly disallowed for offside.

Switzerland improved after the break and took the lead on 71 minutes when Hakan Yakin collected onto Eren Derdiyok’s flick and fired past Ricardo.

Yakin then secured Switzerland the victory their public craved with a well-taken penalty. Austrian referee Konrad Plautz pointed to the spot after substitute Barnetta was felled by Meira and Yakin fired past Ricardo and into the top-left corner.