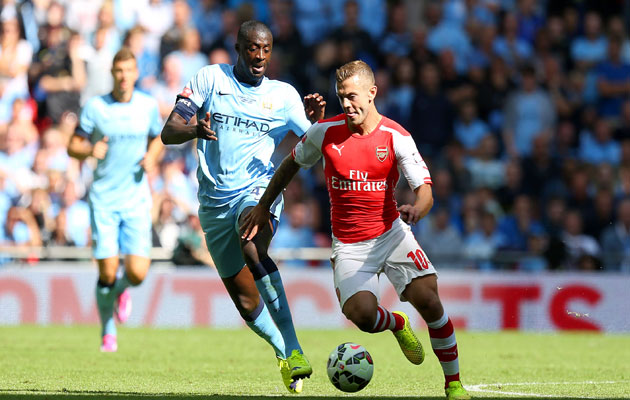 Arsenal welcome Premier League champions Man City to the Emirates on Saturday, and will be very much hoping to win at home after only one league victory in their first three games of the season.

England striker Danny Welbeck is set to make his Arsenal debut at the Emirates after his arrival from Manchester United for £16million on deadline day. He will be hoping to score on his debut after his two goals to secure England’s first win in the Euro 2016 Group Stage. Aaron Ramsey of Arsenal will hope to be cleared to play the game after picking up an injury in Wales’ match against Andorra, while Serge Gnabry and Olivier Giroud will miss out.

For Manchester City, Pablo Zabaleta is all but ready to return after a knock in the international break, but Bacary Sagna will hope to be selected at right-back against his former club.

Forward Stevan Jovetic is a doubt after sustaining a hamstring injury while away with Montenegro. This could cause a problem for City. They may have a number of strikers, but they are a team used to playing two up front, and with Negredo out on loan, Jovetic injured, Aguero with low fitness after the World Cup and Dzeko not being the most prolific goal-scorer, they could struggle against Arsenal.

The two sides who are yet to drop a single point between them will face off at Stamford Bridge. Both teams have also won an award each: Chelsea’s Diego Costa, who is a doubt for this game after picking up an injury with Spain, earned Player of the Month for August after scoring 4 goals in his first 3 games, while Swansea City boss Gary Monk, who only retired as a Swansea player this year, was deservedly given Manager of the Month for August.

But coach Jose Mourinho has other options if Costa cannot play, with new signing Loic Remy from QPR yet to make his debut and Didier Drogba, who is yet to start since his return to Stamford Bridge. Eden Hazard will undergo a late fitness test before the game, as will Wilfried Bony of Swansea, who enjoyed a very impressive first season with the club, which brought interest from several clubs including Tottenham and Liverpool.

The Premier League’s bottom two face off at Selhurst Park, with Neil Warnock in charge of Palace for his first home game since his return to the Eagles.

Wilfried Zaha, who scored on Match Day 3, and has been loaned back to his old club from Manchester United, netted twice in a 4-3 victory the last time these two clubs met at Selhurst Park back in the Championship. Burnley picked up their first point of the season in their last game, which was a 0-0 with a Turf Moor with Manchester United.

Kevin Doyle, on loan from Wolverhampton Wanderers, who scored twice in 10 games on his previous loan to QPR, could feature for Palace along with fellow deadline day signings Zeki Fryers from Spurs, and James McArthur from Wigan.

Returning Striker Andrew Johnson could also play, but he would struggle to push in-form Dwight Gayle out of the team. The Eagle’s will have to do without the services of Marouane Chamakh, who is out for three weeks, as well as Jimmy Kebe, Stuart O’Keefe, Lewis Price and Peter Ramage.

Burnley made three deadline day signings, but Chalobah, on loan from Chelsea and Keane, on loan from Man Utd have been told they are unlikely to feature straight away.

However George Boyd could well play in attack after training well with Dyche’s squad during the international break. Burnley’s only absentee will be Sam Vokes, after Danny Ings returns after suffering from an illness.

Newcastle United travel to St Mary’s at the weekend, searching for their first victory of the season.

The Magpies struggled at home against Crystal Palace two weeks ago, where they were denied the win by a late Wilfried Zaha equaliser.

The last time Saints met Newcastle at their stadium they thrashed them 4-0, although none of the three goal-scorers will be playing, with Adam Lallana and Rickie Lambert completing moves to Liverpool, and Jay Rodriguez, who scored twice in the March game, sidelined with a cruciate ligament injury.

Both teams have much changed sides since last season, especially Southampton after their summer clear-out, where they saw £105.2million worth of players leave the club, and spent £64.4million of it.

Atletico Madrid loanee and Belgian centre-back Toby Alderweireld could make his debut for Ronald Koeman’s new look side, while another centre-back Florian Gardos of  Romania is also in contention. Senegalese Winger Sadio Mane, who recently arrived from Red Bull Salzburg for £11.8million, may play a part too. Along with Saints winger Rodriguez, Koeman is without Lloyd Isgrove and Sam Gallagher.

Newcastle are without new singing Siem de Jong, brother of last season’s PSV loanee Luuk de Jong, through injury. Midfielders Cheick Tiote and Jack Colback will return to the Newcastle squad after both recovering from injuries, whilst midfielder Rolando Aarons is still out with a hamstring injury.

Also yet to return are striker’s Papiss Cisse and Facundo Ferreyra who are out with knee and back injuries respectively.

Leicester City visit Stoke City at the Britannia Stadium as both sides look to build on positive starts to the new season.

Stoke have managed a loss, a draw and a very impressive victory away at Man City in which new signing Mame Diouf scored the only goal. Leicester managed two draws from their home matches against Everton and Arsenal, but lost to Chelsea.

Stoke will have to make do without striker Peter Odemwingie, after being carried off the pitch in Match Day 3 against Man City. He suffered a knee injury and is likely to be out for several months. Geoff Cameron is also unavailable after the club confirmed he is set to undergo hernia surgery. Assaidi, who has returned from Liverpool for a second loan, is in contention for Stoke, although Hughes may not want to risk him following a summer injury.

Argentine midfielder Esteban Cambiasso, who arrived on a free transfer from Inter  on deadline day, is yet to feature for Leicester but was an unused substitute against Arsenal. Fellow deadline day signings Nick Powell and Tom Lawrence from Man United are also available as is new defender Danny Simpson. Matty James is back in training after an injury to his shin, but the game has come too quickly for the midfielder and he will have to sit it out. Also absent is ex-Stoke and England defender Matthew Upson, who is sidelined with a foot injury.

Sunderland will take on Tottenham at the Stadium of Light on Saturday, and will be hoping to come back from a defeat to QPR on the third week of the Premier League.

Sunderland have secured a draw, a win and a loss so far in the league, the draw being against Man United, whilst Tottenham have managed two victories and a defeat in the premier league including a 4-0 demolition against Queen’s Park Rangers. Spurs manager Mauricio Pochettino has also managed two Europa League victories, but suffered a 3-0 home defeat to Liverpool a fortnight s ago.

Sunderland summer signings Sebastian Coates and Ricky Alvarez are hopeful that they can make their debuts in the clash against the Lilywhites, who both joined on loan on deadline day, from Liverpool and Inter respectively. Gus Poyet has no injury concerns for the game.

For Spurs, new signings Federico Fazio, from Sevilla, and Benjamin Stambouli from Montpellier could play a role in Wearside match.

Pochettino has stated that he expects both to travel with the team. Roberto Soldado, who had a very disappointing debut season is out with a neck injury, as is Kyle Walker with a hip injury that he sustained in early march.

However, no Spurs player returned from the international break with an injury, although Nabil Bentaleb of Algeria only returned on Thursday, so is very unlikely to play a part in what Tottenham would hope to be a third victory from four games.

West Bromwich Albion welcome Everton to The Hawthorns, and both sides will be desperate to clinch a win as neither have had the upper-hand in either of their first three games.

New West Brom boss Alan Irvine clashes with his former club and will be very much hoping to come out victorious, especially with Everton conceding 6 goals in the 3-6 thriller at Goodison Park, and 10 goals all together this season. Although Toffee’s boss Roberto Martinez will we expecting an immediate response from the team that finished 5th in the Premier League last season.

Ben Foster is set to return for West Brom following a thumb injury. Joleon Lescott who arrived from Manchester City in the summer could well make his debut for the club as he has all but recovered from a knee injury, while Sebastian Blanco, Georgios Samaras and Silvestre Valera may feature although they all lack full fitness.

Chris Brunt, Graham Dorrans and Gareth McAuley are available too, as they have recovered from knocks received during international duty. Youssouf Mulumbu’s hamstring injury and Victor Anichebe’s hernia are set to be assessed.

Martinez will check on midfielder Leon Osman and summer signing striker Samuel Eto’o before the trip to West Brom. Osman sustained a calf injury in a friendly earlier in the week, while former Cameroon forward Eto’o has been suffering from a groin problem since facing former club Chelsea two weeks ago. Ross Barkley won’t be returning for another month because of a knee injury, but Arouna Kone with a knee injury and Bryan Oviedo who broke his leg are very close to full fitness after taking part in a private game against Stoke earlier in the week.

Third will face fifth in the late game on Saturday as Liverpool host Aston Villa at Anfield.

Liverpool were impressive in their previous game against Tottenham Hotspur at White Hart Lane, with an exceptional performance from the young England international Raheem Sterling.

Liverpool boss Brendan Rodgers will have to think carefully about his selection as his side face a hectic schedule with 7 games in the next 21 days. Maro Balotelli, who recently arrived from Milan for £16million, is set to make his Liverpool home debut.

Liverpool summer signing Adam Lallana will most likely make his competitive debut for the club, as he has now recovered from his pre-season knee injury. However defenders Martin Skrtl, Jon Flanagan and Glen Johnson are yet to return. New signing Emre Can from Bayer Leverkusen and Wales international Joe Allen will also both miss out after picking up ankle and knee injury’s respectively whilst out on international duty.

Paul Lambert, Aston Villa manager, may allow English midfielder Tom Cleverley to make his debut after arriving on loan from Manchester United. However Villa have a few injury doubts over several players.