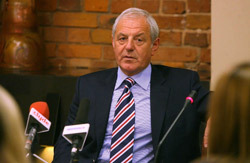 Arsenal continue their pre-season preparations tonight with a trip to Huddersfield. See all the latest betting here.

Rangers were today counting the cost of their shock exit from European competition at the hands of FBK Kaunas.

Defeat in the Champions League second qualifying round means last season’s Uefa Cup finalists will miss out on a potential £12m windfall.

Rangers boss Walter Smith said: “We have gone from the sublime to the ridiculous in going from a final to losing in the qualifying stage,” admitted Walter Smith, the Rangers manager.

“But it has happened. It is thoroughly disappointing but if we had gone through we could have counted ourselves fortunate because our level of performance was nowhere near what it reached last season.

“It’s a blow in every aspect, including the financial side and everything that comes with it.

“We still have to change the squad but there will be an impact on the budget.”

A Linas Pilibaitis header four minutes from time gave the Lithuanian outfit the win and the loss at such an early stage in the Champions League qualifiers means the Glasgow team will not even enter this season’s the Uefa Cup.

Last season, Rangers reached the Uefa Cup final in Manchester where they were beaten by Zenit St Petersburg.

Smith admitted his summer transfer budget will be affected by their European defeat.

“We have been looking to bring in at least one, maybe two, midfield players,” said Smith.

“But we have to wait and see what transpires when we take into account the ramifications of not having European football.

“If the benefit of European football is that you get Champions League money to spend then, of course, when you don’t have it we will have to be careful with what we do.”

Smith will have to come up with some answers by Friday when he and the club’s owner Sir David Murray and chief executive Martin Bain will take part in a pre-arranged question-and-answer session at the club’s training complex.

Then he will be charged with lifting his players’ morale for Saturday’s SPL opener at Falkirk.

Arsenal continue their pre-season preparations tonight with a trip to Huddersfield. See all the latest betting here.