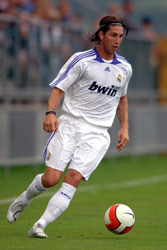 Ramon Calderon has rubbished suggestions that Sergio Ramos is considering quitting the club to join Chelsea.

The Real president was speaking in response to claims that his club could be tempted by a world record bid for the highly-rated defender.

“There is no reason to worry. His future is with Real Madrid. Sergio Ramos is one of the pillars of our project here and he has his entire career at the club ahead of him,” Calderon told Onda Madrid radio station.

“He would only leave if he wanted to, but I have seen nothing to suggest that he does. He is very happy with us. When you are playing for Real Madrid, why would you want to go to another club?”

Looking ahead to the summer, the Madrid chief said there would be no significant departures and that he would be looking to strengthen the current squad.

“We have obtained a strong unity and do not want to spoil that. There will be a few new faces, but those that there are will be good and will be seen by everyone to be adding quality and competition.

“Their behaviour, attitude and family life are key elements. A person that is not orderly off the pitch will not be considered.”

Calderon has told coach Bernd Schuster that after winning the league title in his first season in charge, he must now reach the latter stages of the Champions League next season.

“That is the next plan and we must reach the semi-finals at least,” he continued,.

“There are always ups and downs, but we have won at some important grounds, like San Mames, El Calderon, Camp Nou and Mestalla, as well as Villarreal, and that was not by luck.

“It was difficult for him because he inherited a team that had just won the league and winning it again was his obligation.”