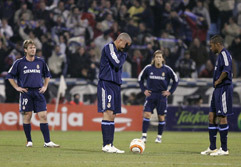 Four goals from Diego Milito helped Real Zaragoza to a devastating 6-1 demolition of Real Madrid in the first leg of their Kings Cup semi-final.

The Argentine helped himself to a hat-trick in less than 20 first-half minutes as Zaragoza inflicted one of the heaviest defeats in Real Madrid’s history.

Although Real pulled a goal back to make it 3-1 when Julio Baptista headed home David Beckham’s cross, Milito scored his fourth 10 minutes after halftime.

Milito’s strike partner Ewerthon also got in on the act when he scored his side’s fifth soon after and the Brazilian added a second seven minutes from time.

“I’m delighted, it was a fantastic victory,” Milito said afterwards. “It was a unique night for me.”

“We bordered on perfection out there tonight,” he said. “The tie is not over yet but we’ve taken a magnificent step towards the final.”

The defeat is a major blow for Madrid as they had been on a good run of form recently and it appears their hopes of winning any silverware this season now rest on the Champions League.

It was the Madrid side’s heaviest loss since their 6-0 defeat to Valencia in a cup semi-final in 1999.

Espanyol host Deportivo Coruna in the first leg of the other semi-final on Thursday.