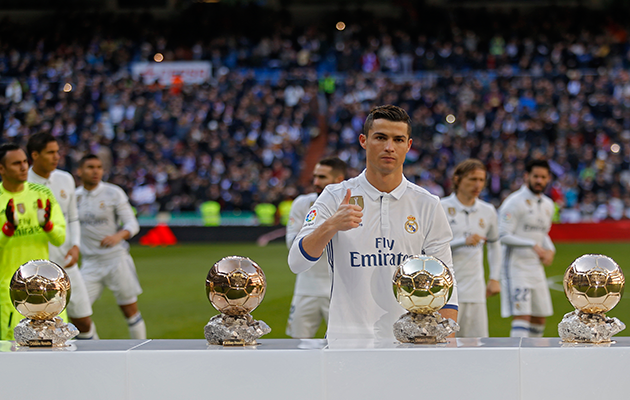 European champions Madrid were rewarded for last season’s Champions League success by the club the club having five representatives included in the FIFA FIFPro World11 2016 and the main Best Player prize going to Cristiano Ronaldo, ahead of Barca’s Lionel Messi.

Barca also had four players chosen in the official FIFA Team of the Year, but none of them attended the awards ceremony in Zurich.

“I don’t want to get into any controversy, but my opinion is that the Barcelona players should have been here,” Real midfielder Luka Modric said.

Team-mate Sergio Ramos said it was “strange” that he was not sharing the moment with Spain teammates Andres Iniesta and Gerard Pique, but said they would “have their reasons” for staying at home.

“It is a bit strange,” Ramos said. “Two are my Spain teammates, and my friends. They will have their reasons.”

Ronaldo was asked on Spanish radio show El Larguero whether he had received a message of congratulation fromMessi about the award.

Ronaldo said he would have liked Messi to have attended the ceremony, and would make sure to show up in future if he is nominated again.

“Not just him, but all the Barca players,” Ronaldo said. “I understand they have a big game on Wednesday, but I obviously would have liked them to be there. I always do what the club say I should do. For example I was at the [Ballon d’Or] awards every year. And if I am nominated in the years to come I will be there too.”

Atletico Madrid’s Antoine Griezmann, who finished third in the voting, attended the ceremony even though his club have a Copa del Rey game on Tuesday evening.

“Griezmann could have won too, he deserved it for the season he has had, with Atletico and France too,” Ronaldo said. “Griezmann was here today, and that was very good.”