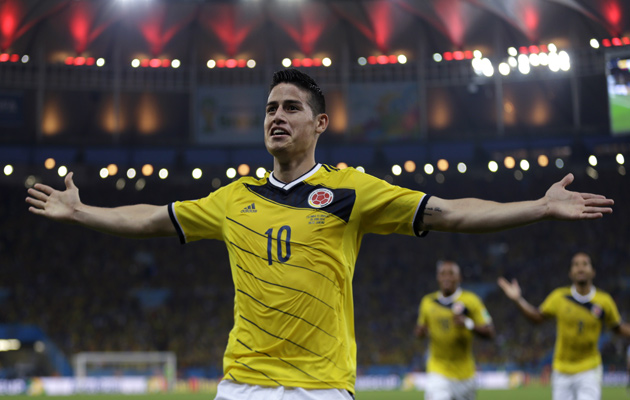 The 23-year-old Colombia forward has agreed a six-year deal at the Bernabeu and joins in a deal reportedly worth 80million euros (£63m).

If that figure is correct, it will makes Rodriguez the fourth most expensive transfer of all time after Gareth Bale, Cristiano Ronaldo and Luis Suarez.

Rodriguez was one of the stars of the World Cup, scoring six goals in five matches at the World Cup as his side reached the quarter-finals. His second goal in the 2-0 win over Uruguay, was voted goal of the tournament.

The former Porto forward won the Portuguese league three years in a row before joining Monaco last season, where he scored nine goals in 34 Ligue 1 games.

Monaco vice-chairman Vadim Vasilyev said: “The time came when the solution of a transfer was considered to be the most beneficial solution for all parties.”

Monaco said they had not been looking to sell Rodríguez but described the deal as “one of the most significant transfers in football history”.

“The club would like to take the opportunity to thank James for the role he played in getting the club back to the Champions League and wishes him the very best for the future,” they said.

“The club had no intention to sell the player, however the time came when the solution of a transfer was considered to be the most beneficial solution for all parties.

“Monaco is proud to be a party to one of the most significant transfers in football history. Monaco is a club that will continue to grow and remains focused on the future. More than ever it has the ambition to strengthen the team and continue to progress for next season.”

Rodriguez’s signing comes less than a week after Real Madrid signed German World Cup winner Toni Kroos, who moved from Bayern Munich for a fee reported to be £20 million.